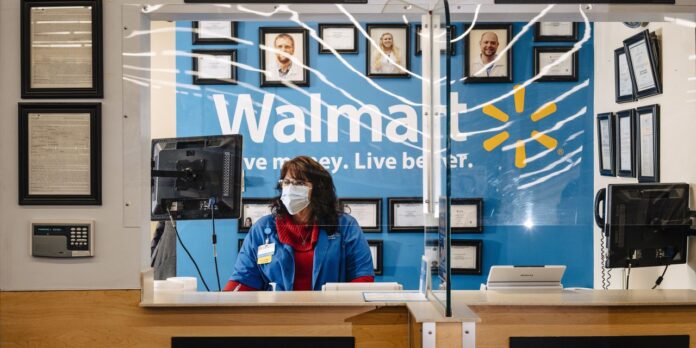 said it would raise wages for about 425,000 of its employees after a year in which the Covid-19 pandemic boosted its business and demand for workers who handle online orders.

The company reported strong holiday sales but predicted slower growth and higher spending this year. U.S. comparable sales, or those from stores and digital channels operating for at least 12 months, rose 8.6% in the quarter ended Jan. 29, an acceleration from the third quarter, when sales climbed 6.4%, and higher than most analysts’ forecasts. U.S. e-commerce sales, which include online grocery orders, increased 69% from a year earlier.

Walmart has been competing with

and others for warehouse workers and other staff that are handling a surge in online orders during the pandemic. Amazon raised its starting U.S. wage to $15 an hour in 2018 and hired 500,000 people last year to bring its global workforce to 1.3 million. Both companies also doled out bonuses to many of their staffers last year.

The pay raises will be for store workers in digital and stocking roles, said Walmart U.S. Chief Executive

That targets roles that have been especially important during the pandemic, including workers that gather products from store shelves for online orders picked up in parking lots or delivered to homes. Walmart has worked to keep shelves stocked as shoppers stockpile certain items such as food and cleaning supplies.

“We saw major changes to customer behavior last year we believe will be lasting, and we have to continue working to stay in-stock, deliver items on time and provide the best omni experience possible,” said Mr. Furner.

Starting March 13, pay for workers in those roles will move up to $13 to $19 an hour, based on a store’s location.

last year made $15 an hour their starting wage for all workers. The Biden administration and Congress are considering raising the federal minimum wage from $7.25 an hour.

has previously said the company believes the federal minimum wage should go up, but that $15 was too high for some regions and businesses. After the raises, about half of Walmart’s U.S. hourly workforce, or around 730,000 employees, will earn $15 or more an hour, the company said.

On a call Thursday with investors, Mr. McMillon said the company adopted this approach, rather than a $15 minimum, to create a “ladder of opportunity” for more workers to start at the company as cashiers at the low end and advance to higher-paying roles. He said he expected the company’s minimum hourly U.S. wage will naturally increase over time.

Walmart workers who receive the latest raises will no longer get a quarterly bonus after the first quarter of this year, according to documents viewed by the Journal. That is similar to bonus elimination Walmart implemented for about 165,000 workers who got pay raises last year.

“The overwhelming majority of our associates say their hourly wages are the most important part of their pay,” said a Walmart spokeswoman. A regular raise instead of a bonus offers workers more predictability in their pay, she said.

Average hourly earnings for nonsupervisory retail workers in the U.S. was $18.17 an hour in January, according to the Labor Department. The average wage was up from $16.92 an hour a year earlier. Economists attribute at least part of the increase to lower-wage workers losing their jobs during the pandemic. The sector employed nearly 400,000 fewer workers in January than a year earlier.

Walmart’s sales rose during the fourth quarter due to strong holiday shopping, with an additional boost when U.S. stimulus checks arrived in January, Walmart said. Food sales went up as the quarter progressed, the company said.

Adjusted per-share earnings hit $1.39 during the quarter, lower than the $1.51 analysts expected, according to FactSet. Walmart spent around $1.1 billion in the quarter on Covid-19-related expenses such as increased pay and benefits. The expense was partially offset by reduced travel and professional service costs, the company said.

Walmart said it expects lower profits and slower growth in the new fiscal year. It forecast U.S. comparable sales would rise by a low-single-digit percentage, compared with 8.6% growth in fiscal 2021. Walmart, like many other businesses during the pandemic, had stopped giving financial guidance in recent quarters.

Walmart, the country’s largest retailer by revenue, has generally fared well throughout the pandemic, rushing to fill shelves when shoppers stockpiled early in the pandemic, then benefiting as a drop in restaurant meals led more people to cook at home and stock up on home goods and children’s entertainment. Unlike many retail competitors that were struggling before the pandemic hit, Walmart had already invested heavily in e-commerce, including online-order parking-lot pickup, a service that has grown in popularity as more shoppers avoid stores for health reasons.

Walmart’s total revenue reached a record $152.1 billion in the fourth quarter, an increase of 10.3% from a year ago, and its operating income rose 3% to $5.5 billion. The company reported a quarterly net loss of $2.1 billion, reflecting hefty losses tied to the pending sales of its U.K. and Japanese operations.

Retailers have reported mixed results over an unusual holiday season that started early and relied heavily on e-commerce sales. Amazon said quarterly sales jumped 44% to $125.6 billion, while Target’s comparable sales in November and December rose 17% compared with a year earlier.

which owns the Coach and Kate Spade brands, said sales fell over the holidays due to less store traffic, while profit increased as it pulled back on discounts.

The Commerce Department reported that retail sales, which includes spending at restaurants and online, jumped a seasonally adjusted 5.3% in January from a month earlier. It was the strongest gain since last June, when the economy was in the process of reopening from pandemic-related closures.

—Eric Morath contributed to this article.

Write to Sarah Nassauer at sarah.nassauer@wsj.com