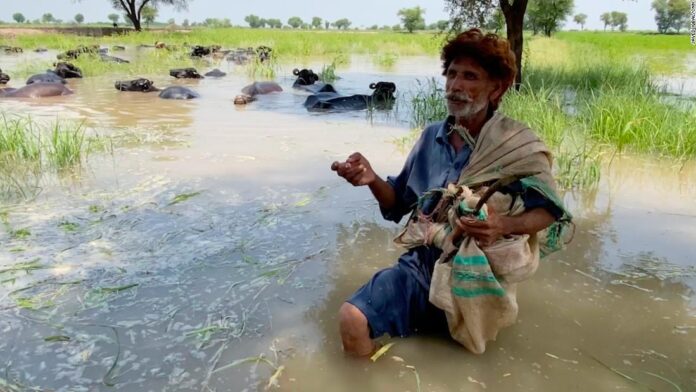 That was the warning from the villagers of Sehta Sehanj, where flooding caused by the overflow of Pakistan’s largest lake has left many residents trapped by rising water levels and fearing for their lives.

Lake Manchar — which has swelled to an area hundreds of square kilometers wide due to the combined effects of a heavy monsoon and melting glaciers — breached its banks for what was at least the third time on Tuesday, leaving nearby villages under several feet of water.

Pakistani authorities are in a desperate race against time to lower water levels at the lake in Sindh — the country’s second most populous province, home to nearly 48 million people — fearing that a full-scale breach of its banks could inundate nearby cities.

In a bid to avert that scenario, they allowed the lake to overflow twice on Sunday in an attempt to divert some of the lake’s waters into less densely populated areas. But this has led to flooding in smaller villages that has affected around 135,000 people, Sindh province’s irrigation minister Jam Khan Shoro told CNN on Wednesday. Shoro said the move was necessary to avoid wider flooding in the district of Dadu, home to around 1.55 million people.

The lake also overflowed on Tuesday, in what officials said was a natural occurrence and not part of efforts to divert the water.

Shoro said officials had on Sunday had tried to warn people in towns near the lake that it would overflow and had urged people to leave the area.

“We are trying our best to provide relief to the people but the scale of the disaster is so high and the number of people affected is also so high,” he said. “It’s nearly impossible for our government to provide everyone with shelter, food, and medicine. It’s difficult.”

Shoro added that the army and navy were being enlisted to help the relief efforts and authorities were communicating with elected officials in the villages.

Murad Ali Shah, the chief minister of Sindh, said Wednesday he did not want the lake to overflow but if authorities had not diverted the water, cities up to 100 kilometers (62 miles) from the lake — such as Sehwan, Dadu and Mehar — would have been put in danger.

While those areas have been spared, at least for now, villages nearby are bearing the brunt.

“(Our) village is submerged. There is no way to go (to it),” said Noor Mohammad Thebo, who spoke to CNN on a roadside as rapidly flowing water swirled around his ankles.

Thebo said 10 to 15 families had been cut off by the rising waters in his village near the lake and that water up to 1.5 meters (five feet) deep now covered its main access road — making any rescue efforts a dangerous affair.

“There are no rescue teams that could help (the trapped families) and there is no way for (the families) to come out,” Thebo said.

In Bachal Chana, another nearby village, resident Yar Mohammad said people had been caught completely off guard when overflowing water from Lake Manchar rushed in.

“It destroyed our crops and houses. The breach took place suddenly and we were unaware (it was about to happen.) No one had informed us,” said Yar Mohammad, standing knee-deep in murky water.

Around him, cattle were almost completely submerged, with only their heads peaking through and gasping for air.

Many villagers must now choose between staying put and taking their chances with further floods or leaving their homes and seeking shelter and aid elsewhere.

New satellite images from the European Space Agency’s (ESA) Sentinel Labs show how the lake has swelled over the past two months into an area covering hundreds of square kilometers following record levels of rain. What were once islands and peninsulas in the lake have disappeared and surrounding land has been swallowed up.

The satellite images also show that despite the breaches water levels at the lake remain dangerously high — suggesting there may be more misery to come for nearby villagers.

Ghulam Murtaza, 35, from Sehta Sehanj, said the government had warned his village that it remained in danger as it was naturally downstream of the lake.

“They say that there is no other way. But it has left our area inundated,” Murtaza said.