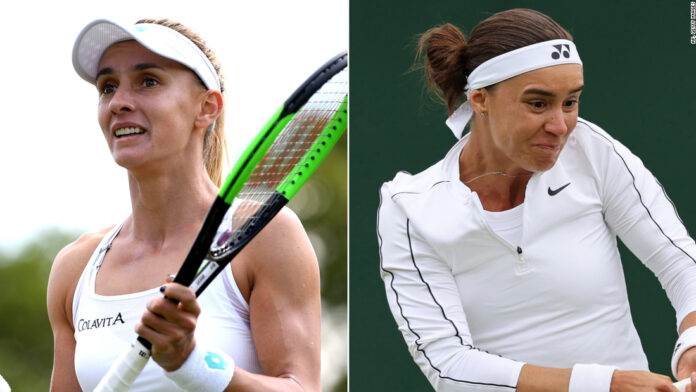 For the Ukrainians competing at SW19, however, the war never truly leaves them.

On Wednesday, Anhelina Kalinina will face Lesia Tsurenko in an all-Ukrainian second-round match they hope can draw attention to the continued plight of their country.

Since Russia began its war in Ukraine in February, millions of refugees have fled Ukraine to neighboring countries, and for Kalinina, her family is among the uprooted.
She confirmed to reporters on Monday that her parents’ home in the Kyiv suburb of Irpin had been bombed, saying “they are alive, they are safe” but “living on the bags and praying every day.”

“There are huge holes in the house, like huge holes,” she said, before revealing the family were now living with her and her husband.

“It’s a very small apartment for my family, because, like, my mum, my dad, my brother, and they have pets.

“They are so happy, and we are grateful … that they have a place to move from Irpin city because Irpin is fully bombed.”

“I’m helping a lot my grandmother and grandfather who are in occupied territory now,” she added.

“They can’t leave. So next door is like Russian soldiers with all their military stuff.”

“I understand it’s hard to focus, but for me it matters if I win or if I lose,” Kalinina said.

“If you go further, you earn more money. Then I’m able to help, and I’m helping as much as I can and not only to my family. So for me that matters.”

‘We still have war and we need your help’

Her opponent on Wednesday, Tsurenko, has been working with a psychologist to navigate the trauma caused by the war.

While Tsurenko’s mother continues to reside in the south of Ukraine, her sister now lives in Italy near her having lived through three months of the war in Ukraine.

“I don’t feel good,” she told reporters. “I feel really worried, especially because I know that they are trying to get the one object, which is 100 meters away from my home, from the building where I live.

“When the war started, I start to feel this tension inside of me … This feeling, this tension will only be released when the war will finish. There is nothing I can do about it.”

In previous grand slams this year, Tsurenko was drawn against the eventual tournament champion in the opening round — Ashleigh Barty at the Australian Open and Iga Swiatek at the French Open.

At Wimbledon, however, Tsurenko received a more favorable first-round opponent and dispatched Britain’s Jodie Burridge in a 6-2 6-2 victory.

Like Kalinina, her motivation to continue playing tennis stems from using her platform to help her country.

“I think with all the sportsmen that are able to take part in the competitions, also with all the singers that go to Poland, to Germany, and having all the concerts, that part when Ukrainians can just go and remind the whole world that we are here, we still have war and we need your help,” she said.

“This is the main thing that I would wish to happen, that we get a lot of heavy weapons. We just want to remind [people] that Ukraine is in trouble and we need help.”

On the same day as Tsurenko’s first match at Wimbledon, the war spilled out of the front line once again as a Russian airstrike struck a shopping mall in Kremenchuk, central Ukraine, killing at least 18 people.

The tennis player said the toughest part for her was that she knew people on the front line.

“One guy has been taken by Russians, so we don’t know what is going on with him,” she said.

“We know that he’s alive. Two more guys are fighting there at the moment, and a few people are dead already because of the war.”

On Monday the two players had not decided how to honor their home country during their match.

“It’s great that two of us are meeting in the second round, and so it will be one Ukrainian in the third round,” she continued.

Tsurenko said that, if allowed, she would wear a Ukrainian ribbon on her kit.