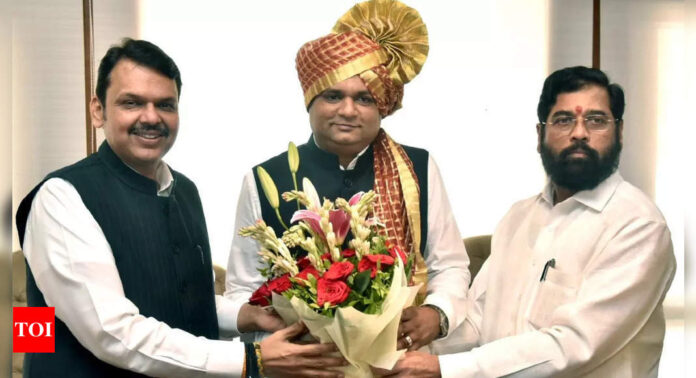 MUMBAI: Eknath Shinde-led government is all set to face a majority/floor test in a special two-day session of the Maharashtra assembly today. The floor test comes a day after 45-year old Rahul Narwekar of the BJP was elected Speaker of the Maharashtra assembly on Sunday, filling up a vacancy that has been there for over a year.
What, come again?
That’s right. The Speaker’s post has been vacant since February 2021, when Nana Patole of the Congress resigned to take charge as the party’s state unit chief. Since then, it was deputy Speaker Narhari Zirwal of the NCP who had been holding the fort as acting Speaker.
Effort in vain
Narwekar’s victory, with 164 votes in his favour in the 288 member assembly, came against the Uddhav Thackeray-led Shiv Sena’s candidate Rajan Salvi. Under the 2019 agreement between the Shiv Sena, the NCP and the Congress, the speaker’s post was to go to the Congress. However, in an effort to boost Thackeray’s fortunes within his imploding party, both the NCP and the Congress agreed to field a Shiv Sena candidate, who only managed 107 votes.
A curtain raiser for floor test?
The election of the Speaker came just a day ahead of the floor vote that is scheduled for today, to demonstrate whether the Eknath Shinde led government has the majority in the assembly or not. Shinde, who broke away from the ‘original’ Shiv Sena along with 39 rebels, has the support of another 10 MLAs, he claims, apart from the 106 MLAs of the BJP. Theoretically, that gives the rebel Shiv Sena-BJP government a majority of 156 — higher than the required majority of 145.
However, if the election of Narwekar as Speaker is any indication, the new government appears to have got some unexpected support as well from both the Samajwadi Party and the AIMIM. While both the MLAs of the former — Abu Azmi and Raees Shaikh — abstained from voting, the AIMIM’s one MLA abstained while another was absent.
Who’s the real Sena?
There was also a major political setback for Thackeray, as the legislature secretariat, following an approval granted by newly elected Speaker Rahul Narwekar, retained Shinde as the leader of the Shiv Sena legislature party and approved the appointment of Bharat Gogawale as the chief whip of the Shiv Sena in place of Sunil Prabhu. The party leadership had on October 31, 2019, appointed Shinde as the leader of the Shiv Sena legislature party. After Shinde left with 39 legislators, Thackeray had replaced him with Ajay Choudhary as the leader of the Shiv Sena legislature party.