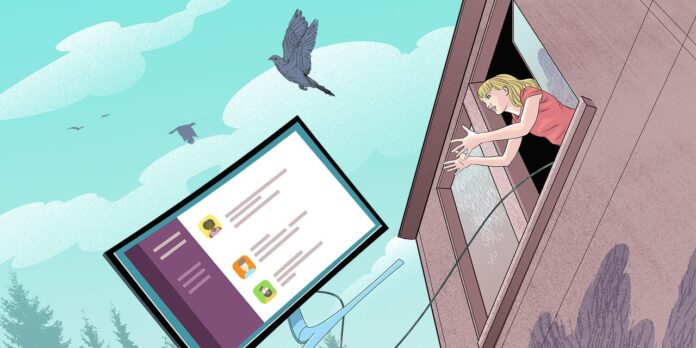 When Becky Kane started interning at a productivity software company in 2014, she experienced a workplace rite of passage: drowning in Slack messages.

The company, Doist, had always been mostly remote, so Slack, the ubiquitous business communications platform, was the main way to connect with her new colleagues. Ms. Kane lives in Minneapolis, but Doist employees work around the world.

“I definitely have an addictive personality,” says Ms. Kane, 29. Slack, with its signature mix of round-the-clock banter, GIFs, updates about serious work projects and small talk, took over her life. “It was so tempting to be there all the time,” she says.

She transitioned from intern into full-time marketer in 2015, and the messages kept coming—until 2016. That’s when her company quit Slack. Her workday dramatically improved, she says. These days, she typically logs in to Doist’s internal message board in the morning to check for project updates, logs out, and writes and edits until lunch with few distractions.

In the years since Slack made its debut in 2009, it’s helped cement instant messaging as an essential part of white-collar work. But many beleaguered workers found that it replaced email, never a beloved technology itself, with something even more distracting.

Use of Slack and other collaboration platforms like Microsoft Teams and Facebook Workplace soared during the pandemic. From January to April 2020, the average time that Slack users were active on the platform jumped to about 120 minutes a day from about 85 minutes, according to its latest earnings report. (The Wall Street Journal is a Slack client.) Microsoft Teams found a 72% increase in instant messages in March 2020, compared with a baseline of January-February 2020.

Still, some companies are pushing back on the constant chat trend, by reducing, or even eliminating, the expectation to have any live chats and calls in the average workday. There are simply too many messages.

Going a step further, the company ditched regular meetings, too. Any companywide talks are recorded and posted online.

Asynchronous teamwork also requires some individual changes. Ms. Kane has grown used to communicating deadlines well in advance. She rarely expects her 91 colleagues spread across 35 countries to be online at the same time.

Slack can be used asynchronously, in theory—say, if company culture accommodates slow response times—but that rarely happens in practice.

Slack has a number of features to make notifications more manageable, notes Noah Weiss, the San Francisco company’s vice president of product. These include the option to be notified only if people tag your name and a do-not-disturb mode.

How helpful are tools like Slack to your job? Join the conversation below.

Slack’s key innovation over email, he says, is that users can actively opt into the channels most relevant to their work. He sees email, by contrast, as all kinds of information being pushed to workers. It’s hard to opt out of that, he says, barring measures like blocking senders.

A Microsoft spokesman also points to features that promote asynchronous work on Teams, including setting “quiet hours” and “quiet days” and getting virtual meetings recorded and transcribed.

As for the informal and social parts of Slack chats, from which many users find it especially hard to detach, Mr. Weiss says, “We’ve never [explicitly] focused on trying to enable better social uses of Slack, but we think it’s a good sign that we’ve built a tool for work that people feel makes the workplace more humane.”

Several companies have created their own platforms for asynchronous updates in recent years. Zapier, a company that lets users sync web applications, has Async. Stripe, the fintech company, has Home. These platforms need not displace Slack altogether, but they can take over some functions. Posting updates to company policies during the pandemic on a dedicated page, for instance, eliminates the need to constantly field HR questions in a high-traffic chat channel.

Whatever your messaging platform of choice, making your workplace asynchronous-first involves deliberate choices at every step, says John Meyer, CEO of Lemonly, an infographics design agency in Sioux Falls, S.D., with 17 employees in three U.S. time zones. When he decided to make his company more asynchronous a year ago, he directed his team to write things out instead of defaulting to meetings. He also became an acolyte of Loom, a screen-recording tool that lets you record your computer screen or short videos of yourself.

“That was great for the two members of my team who went on maternity leave during the pandemic. They just recorded videos about how to do their job for the workers who took their place,” he says.

These developments aside, there are still obvious uses for real-time communication, such as personnel disputes, tense work emergencies and deadlines, not to mention hilarious observations with a short shelf life. It’s hard to imagine a company eliminating it altogether.

The key is to be thoughtful about chat boundaries, says Nir Eyal, the Singapore-based author of “Indistractable: How to Control Your Attention and Choose Your Life.”

He doesn’t view communication apps as inherently problematic, but thinks workers can be more deliberate about incorporating them into their workday. “I encourage putting everything on a calendar, not just meetings—even times in a day when you can check Slack,” he says.

Write to Krithika Varagur at krithika.varagur@wsj.com