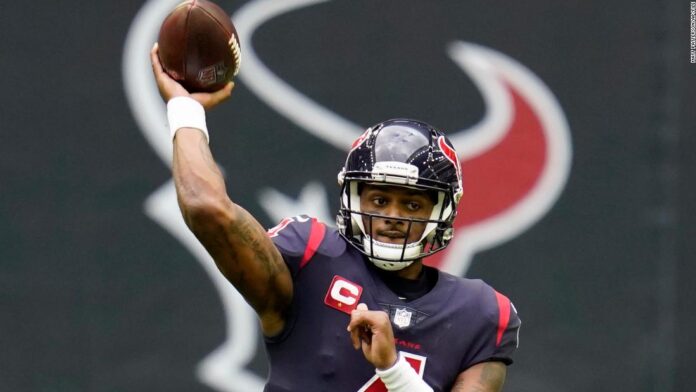 Watson — who played for the Texans from 2017 to 2021 before being traded to the Cleveland Browns earlier this year — has faced lawsuits from at least 24 women alleging a range of violations including sexual assault and harassment. At least 20 of those suits have already been settled.

Attorney Tony Buzbee filed the lawsuit against the Texans on behalf of his client Toi Garner, a former massage therapist student, who alleges that during a massage session, Watson “assaulted and harassed Plaintiff by aggressively exposing his naked body to her, purposely touching her with his penis, and ultimately ejaculating onto her,” according to the lawsuit.

The Texans knew or should have known about Watson’s behavior and should have investigated and addressed the behavior, the lawsuit alleges, but instead provided him with a non-disclosure agreement “to protect himself.”

“We believe the Texans knew or most certainly should have known of Watson’s conduct. Beyond that, we believe the filing speaks for itself,” Buzbee told CNN, saying there would likely be additional lawsuits.

The Houston Texans said in a statement to CNN, “We are aware of the lawsuit filed against us today. Since March 2021, we have fully supported and complied with law enforcement and the various investigations. We will continue to take the necessary steps to address the allegations against our organization.”

In a news conference earlier this month, Watson said he is innocent of all accusations. CNN has reached out to his attorney for comment on this latest lawsuit against the Texans.

Watson is also facing a possible suspension from the league pending the outcome of an official investigation into alleged violations of its personal conduct policy.

The quarterback’s hearing with an independent disciplinary officer, Sue Robinson, is set for Tuesday, according to multiple reports. Robinson was jointly appointed by both the NFL and the National Football League Players Association (NFLPA) per their collective bargaining agreement to hear the case.

Once Robinson rules on whether Watson violated the league’s personal conduct policy, either party can appeal to NFL Commissioner Roger Goodell, and he or his designee “will issue a written decision that will constitute full, final and complete disposition of the dispute and will be binding upon the player,” according to the CBA.

The league is seeking at least a suspension of one year and Watson’s side will argue the alleged violations don’t warrant Watson being suspended for that long, according to NFL.com.

When asked about the hearing, the NFL told CNN it had no comment and the NFLPA said it was “unable to share details as their team is bound by confidentiality.”

Watson’s attorney, Rusty Hardin, declined to comment. The Browns had not responded to CNN’s request for comment.