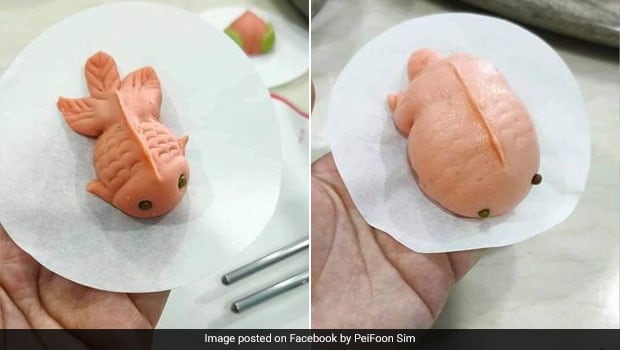 This hilarious photograph will leave you in splits.

The Chinese New Year fell on 12th February this year. Also known as the ‘Lunar New Year’ or the ‘Year of the Ox’, the special day is celebrated with lots of delicious food and a sumptuous feast. Some of the dishes traditionally prepared as part of the dinner spread include egg rolls, dumplings and noodles. There are also a number of desserts made as part of the New Year celebrations. A Malaysian lady tried her hands at baking a delicious fish-shaped cake for the Chinese New Year celebration feast, however, the results were quite different from what she expected. Take a look:

Shared on Facebook by a page called Goldfish fanatics, the post received over 15k shares and 5.4k likes. “I try to be creative on my Chinese new year pau, but after its cooked,” read the caption to the viral post. The idea behind the unique cake was to shape it like a Goldfish with a streamlined shape and scales drawn on top. However, rather than a goldfish, the cake somehow ended up looking more like a frog or an amphibian.

The Internet had a gala time reacted to the sweet photo. While some called it ‘cute’ and ‘adorable’ and also complimented the baker on making the dish, others couldn’t help laughing at the baking fail asking, “Did you overfeed him?” Another one hilariously wrote, “That’s me before and after Covid19 lockdown.”

What did you think of the hilarious baking fail? Tell us in the comments below!