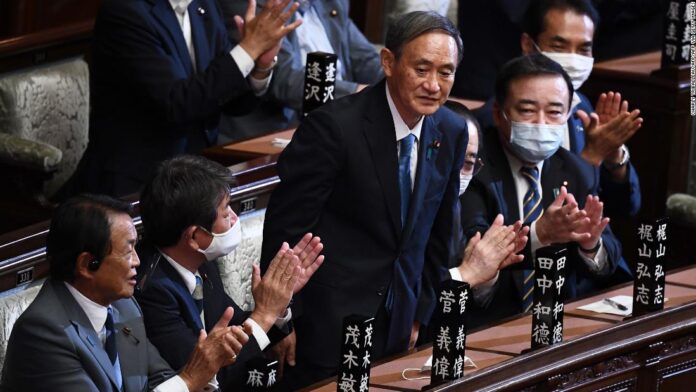 Suga is the longest-serving chief cabinet secretary in Japanese history.

Suga is a teetotaler.

1975 – Accepts a job as secretary to Hikosaburo Okonogi, a member of the House of Representatives from Yokohama.

1996 – Wins a seat in the lower house of Parliament, representing the Kanagawa 2nd district.

December 2006-2007 – Minister of State for Decentralization Reform is added to his portfolio.

August 2007 – Suga is replaced as Minister of Internal Affairs and Communications, Minister for Privatization of the Postal Services and Minister of State for Decentralization Reform by Hiroya Masuda in a cabinet reshuffle.

October 2011 – Chairman of the LDP Party Organization and Campaign Headquarters.

September 2014 – Given the additional title of Chief Cabinet Secretary Minister in charge of Alleviating the Burden of the Bases in Okinawa.

October 2018 – Is named minister in charge of the Abductions Issue, tasked with investigating the abduction of citizens by North Korea during the 1970s and 1980s.
2018 – US Secretary of State Mike Pompeo travels to Tokyo and meets with Suga.
April 1, 2019 – Suga announces the name of the era of Japan’s new Emperor Naruhito, Reiwa or “beautiful harmony,” gaining worldwide notice and earning the nickname “Uncle Reiwa.”
May 2019 – Travels to Washington, DC, to meet with Vice President Mike Pence and other senior officials.
September 14, 2020 – Suga is voted in as the new leader of the ruling LDP, securing about 70% of the votes and paving the way to become prime minister in a parliamentary vote later in the week.
September 16, 2020 – Suga is formally voted in by parliament and is sworn in by Naruhito at the Imperial Palace as Japan’s new prime minister.
April 16, 2021 – US President Joe Biden hosts Suga at the White House. Suga is the first foreign leader to visit the US since President Biden took office.