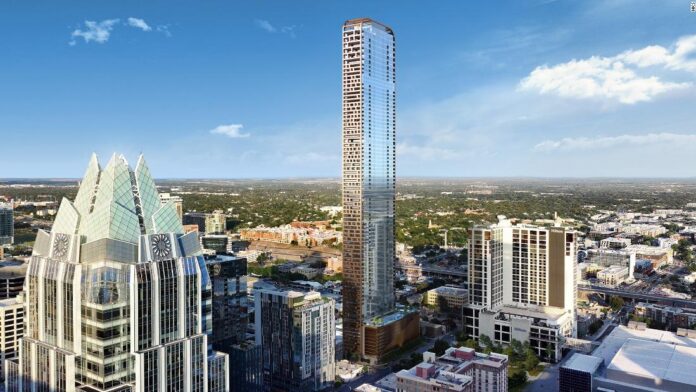 There’s a well-known saying that everything is bigger in Texas. But so far, that hasn’t been the case for the state capital’s skyline.

That could change soon, said Brad Wilkins of architecture firm HKS, during an interview with CNN.

Wilkins has worked on some of the world’s tallest buildings — including Dubai’s Burj Khalifa and the Wuhan Greenland Center in China — and he’s the principal and design director behind Wilson Tower, an 80-story, 1,035-foot residential skyscraper planned for Austin, Texas.

The project, which developer Wilson Capital announced this month, is expected to break ground next summer though it is still going through the permitting process and a budget has not been made available to the public.

The 80-story, 1,035-foot project is still going through the permitting process. Developers say they expect to break ground in summer 2023. Credit: HKS

HKS believe it will be the tallest building in Texas and the tallest residential building outside New York in the United States. But maybe not for long.

“We’re going to see others of this height throughout the city. I won’t be surprised to hear about more,” Wilkins said.

Supertalls, by definition, are residential or office buildings reaching 300 meters — 984 feet — or higher. Another supertall project, the mixed-use Waterline skyscraper, is already under construction in Austin. According to current plans, Wilson Tower will be 13 feet taller than that structure, and more than 30 feet taller than the current Texas recordholder, JPMorgan Chase Tower in Houston, which is 1,002 feet tall.

Those who aren’t familiar with Austin and all it has to offer might not expect to hear about supertall skyscrapers under construction there.

“‘Why Austin?’ would be the obvious question,” Wilkins said. “As you scratch beneath the surface, it just makes sense. It’s a really energetic place. It’s amazing how much is happening and how much is going to continue to happen here.”

Related video: A short history of the world’s tallest buildings

According to Wilkins, the initial aim wasn’t to build the tallest building in Texas.

“We didn’t set out to be the tallest … That was really just the result of doing the best design possible,” he said.

The 450 residential units in the building will range from studios to three and four-bedroom penthouses. Developers say plans include four floors of amenities for residents, including a cocktail lounge, movie theater, coworking spaces and a floor dedicated to pets.

While Wilson Tower’s planned height has been making headlines, that’s only one of the design features that Wilkins says will make it stand out.

The initial announcement of the building plan also touted its brise soleil, or sunscreen, which aims to offer protection from the sun and wind and provide structural strength. And there’s an added bonus, Wilkins said.

“It also allows us to have outdoor space behind it — terraces and decks to make living in a tower more friendly to people.”

Wilkins, who not only designs tall buildings, but also makes a point of living in them, said he’s hoping to foster a sense of community through this project and others alike.

“There’s something special about vertical neighborhoods, because it’s a way of living that brings people closer together,” he said. “I meet new people every day in the elevator, I meet new people every day as I go out and walk my dog. … There’s something really special about that, that we’re trying to design into these buildings, to make sure these are things that are bringing that kind of old-fashioned neighborliness back to cities.”

Wilkins is an advisory group member for the Council on Tall Buildings and Urban Habitat. And even though he’s worked on projects all over the world he believes this project will be unique to Austin.

“The colors and textures are all something that we’re trying to ground here in Austin…to be something that’s like no other, that doesn’t belong anywhere else,” he said.