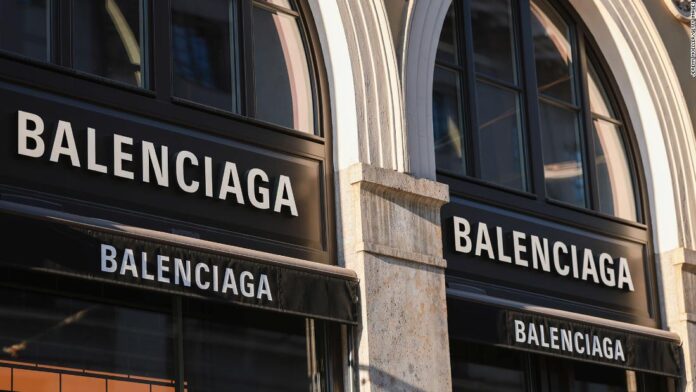 According to the original press release issued last week, the “campaign iterates on the artist’s series Toy Stories, an exploration of what people collect and receive as gifts.”

In its original press release, the company said that the line featured “dozens of new products ranging from homeware, petwear and scent, from everyday items to limited-edition collectibles and bespoke furniture.”

But there was an angry response on social media to the shots which featured young children with plush teddy bear bags dressed in what looked like BDSM-inspired outfits. One child is pictured with an assortment of empty wine glasses.

One Twitter user wrote: “Balenciaga may have “apologized” but everyone knows that campaign got past people at the highest level. This is a publicity strategy, trying to get attention with controversial content. I do not accept their apology and never will. It’s NEVER okay to sexualize kids.”

The company posted an apology on its Instagram on Tuesday announcing that the campaign had been removed.

“We sincerely apologize for any offense our holiday campaign may have caused,” the statement said.

“Our plush bear bags should not have been featured with children in this campaign. We have immediately removed the campaign from all platforms.”

Photographer Galimberti told CNN in a statement Wednesday that the direction and shooting of the campaign were out of his hands.

“I am not in a position to comment [on] Balenciaga’s choices, but I must stress that I was not entitled in whatsoever manner to neither chose (sic) the products, nor the models, nor the combination of the same.

“As a photographer, I was only and solely requested to lit (sic) the given scene, and take the shots according to my signature style.

“As usual, the direction of the campaign and of the shooting are not on the hands of the photographer.”

He added: “I suspect that any person prone to pedophilia searches on the web and has unfortunately a too easy access to images completely different than mine, absolutely explicit in their awful content. Lynching like these are addressed against wrong targets, and distract from the real problem, and criminals.”

‘We stand for children safety’

Hours after issuing the apology, Balenciaga posted a further statement on Instagram apologizing for displaying “unsettling documents” in a separate campaign, referring to documents from a Supreme Court case relating to child pornography laws.

“We apologize for displaying unsettling documents in our campaign. We take this matter very seriously and are taking legal action against the parties responsible for creating the set and including unapproved items for our Spring 23 campaign photoshoot,” the company said.

“We strongly condemn abuse of children in any form. We stand for children safety and well-being.”

Galimberti said he had “no connection with the photo where a Supreme Court document appears.”

Just last month Balenciaga severed ties with the rapper formerly known as Kanye West after a series of antisemitic posts and controversial comments.