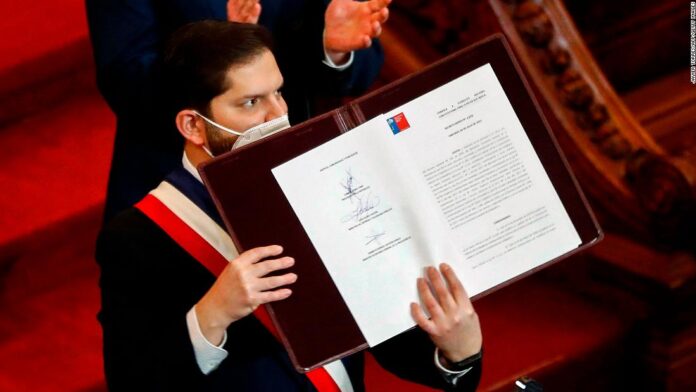 Chileans will decide whether to adopt or reject the constitution in a nationwide plebiscite on September 4.

“I know, and all of Chile is conscious that this hasn’t been easy. And it’s that, dear compatriots, democracy isn’t easy,” Boric said after receiving a copy of the draft document.

“Regardless of the legitimate differences that may exist regarding the content of the text which will be debated in the next months, there is something that all Chileans have to be proud about — that in the moment of the most profound political, institutional and social crisis that our homeland has lived through in decades, Chileans opted for more democracy, not less,” he said.

The proposed constitution marks a departure from country’s existing constitution, which was written under the influence of University of Chicago economist Milton Friedman´s neoliberal model. Despite many amendments, a majority of Chileans blame it for the country´s stark inequalities.

The process towards potentially replacing the constitution inherited from the late General Augusto Pinochet, the dictator who ruled the country from 1973 to 1990, was sparked by a metro fare increase three years ago.

Massive protests and riots throughout the country in the fall of 2019 forced then-president Sebastián Piñera to agree to a referendum on rewriting the constitution.

In October 2020, more than 78% of Chilean voters approved the constitutional change and in June 2021, they cast their ballots again to pick the members for a constituent assembly.

The center-left and right-wing coalitions that have shared power since the return to democracy in 1990 both took a serious blow, obtaining only 16% and 24% of seats in the assembly respectively.

Independents and newcomers from left-wing political parties and social movements in contrast had their hour of glory, gathering 60% of the votes.

Now the country is preparing to vote on the constitution they drew up, which could ring in widespread changes in Chilean society.