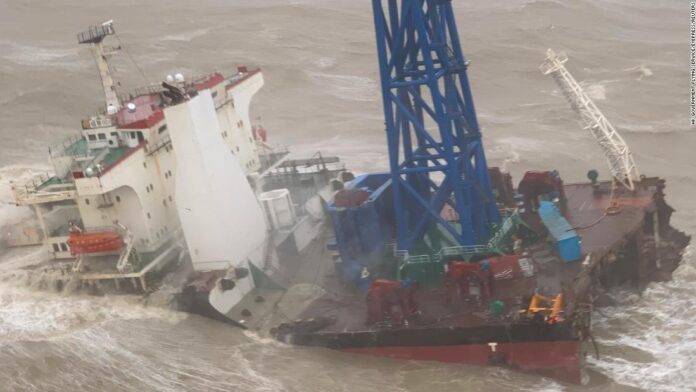 Twenty-six people remain missing after the Chinese engineering ship Fujing001 — with a crew of 30 — sank some 300 kilometers (185 miles) southwest of Hong Kong on Saturday, as the typhoon lashed southern China with winds of 144km/h (89.5 m/h).

While Hong Kong’s Government Flying Service had pulled three people to safety on Saturday, hopes of any further survivors being found were fading after the service said on Sunday evening that the likelihood of that happening was “very, very slim.”

Yet, just hours later, southern China’s Guangdong Maritime Search and Rescue Center announced it had rescued a fourth crew member — who was described as being in a “normal physical condition.”

The finding of the fourth crew member followed the resumption of search operations on Sunday. The search had been suspended overnight on Saturday due to poor weather conditions that made it too dangerous for the rescue teams, according to Hong Kong’s Marine Department.

“We would like to give our hearts to those families of the missing sailors and workers, and I do wish that we could find some survivors, it will be a miracle to do that.”

The next day, the Guangzhou Navy Base confirmed that a fourth crew member — described as a deck worker — had been rescued alive and that arrangements were being made to transfer the person to shore.

The three crew members rescued by Hong Kong’s flying service have all been described as being in stable conditions and are being treated at North Lantau Hospital.

The 240-meter (787 feet) ship — described by Chinese authorities as a “floating crane” — was being used to help construct a wind farm off the coast of southern China when Chaba hit.

Hong Kong’s flying service said that as of Sunday it had used three fixed-wing aircraft, six helicopters and 36 rescuers for the search operation, which had a perimeter spanning 1,300km (807 miles).

The Guangdong Maritime Search and Rescue Center said it had used seven rescue vessels, as well as salvage, merchant and coast guard ships.

The center said it had also coordinated with China Southern Airlines to send rescue helicopters.