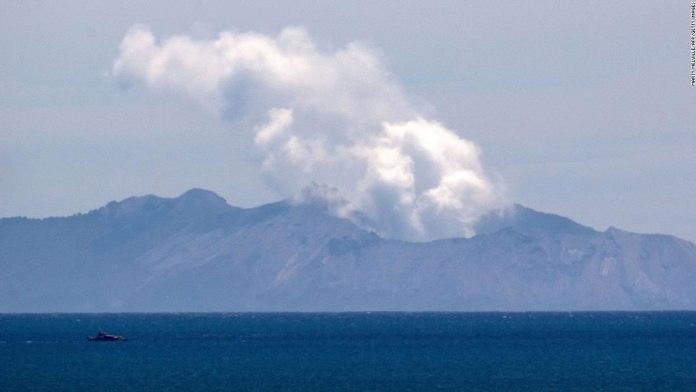 White Island, which is also known by its Maori name Whakaari, is an active volcano off the coast of New Zealand’s North Island. It was a popular tourism destination before it erupted in December 2019, killing local guides and visitors.

The country’s workplace health and safety regulator, WorkSafe New Zealand, announced Monday that it had filed charges against 10 organizations and three individuals, alleging they did not do what was reasonably practicable to ensure the health and safety of workers and visitors to White Island.

“This was an unexpected event, but that does not mean it was unforeseeable and there is a duty on operators to protect those in their care,” said WorkSafe chief executive Phil Parkes.

In the weeks before the eruption, New Zealand volcano monitoring service GeoNet raised the alert level on White Island to Level 2 out of 5, meaning there was “moderate to heightened volcanic unrest.”
Forty-seven people were on the island at the time of the blast, including honeymooners and families, and Parkes said they had gone there with the expectation that systems were in place to make sure they made it home safely.

“That’s an expectation which goes to the heart of our health and safety culture,” he said. “As a nation we need to look at this tragedy and ask if we are truly doing enough to ensure our mothers, fathers, children and friends come home to us healthy and safe at the end of each day.”

The charges follow an investigation which Parkes describes as the “most extensive and complex” in WorkSafe’s history. WorkSafe said it did not investigate the rescue and recovery of victims, meaning that none of the charges relate to any efforts after the eruption.

WorkSafe is not naming the parties charged, as they may seek name suppression when the case has its first court hearing in December.

But some parties have confirmed they are involved. GNS Science — a Crown research organization which monitors volcanic activity — said in a statement that it was facing charges. “We stand by our people and our science — which we will continue to deliver for the benefit of NZ,” GNS said.

The National Emergency Management Agency — a government entity which handles the country’s civil defense — has also confirmed it is facing charges.
Prime Minister Jacinda Ardern said New Zealanders’ thoughts were with the families of those who experienced loss or injuries.

“There is no easy process from here, but it is the work of WorkSafe to make sure that if there are questions to be answered that they play a role and leading the charge on them,” she said.

Refi rates near historic lows. Lock in and save now!