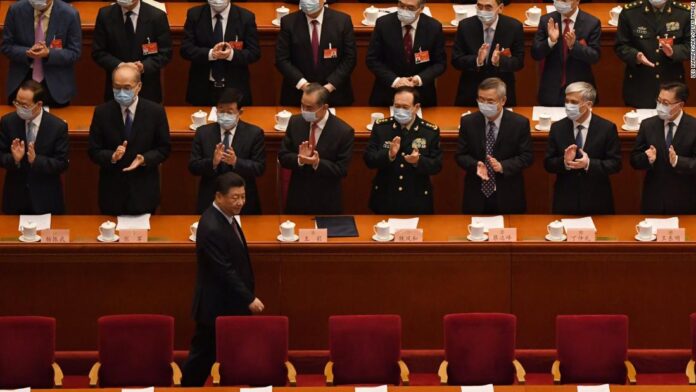 Hong Kong may be about to find out the democracy that fits best, at least in Beijing’s opinion, is no democracy at all.

At the opening of the two sessions — the twin meetings of the Chinese People’s Political Consultative Committee (CPPCC) and the National People’s Congress (NPC) — Thursday, Zhang Yesui, the NPC spokesman, said recent unrest in Hong Kong “showed that the electoral system needs to be improved” in order to ensure “patriots govern.”

Speaking Friday, Wang Chen, vice chairman of the NPC Standing Committee, said changes would affect both the Legislative Council, Hong Kong’s already only semi-democratic parliament, and how the city chooses its chief executive.

The Election Committee, a Beijing-dominated body which currently chooses Hong Kong’s leader, will be expanded, likely diluting the influence of any pro-democracy members, and will also be given the power to nominate all candidates for the legislature, as well as “electing a relatively large share of Legislative Council members,” Wang said.

The proposed moves come after a new loyalty oath was proposed for all Hong Kong elected officials — from local councilors to legislators — that could be used to bar almost all democrats, with China’s top representative in the city saying that “patriotism” in Beijing’s eyes means not just loyalty to China, but loyalty to the Communist Party.
“For years, anti-China forces seeking to disrupt Hong Kong have been colluding with external forces in an attempt to seize the jurisdiction over Hong Kong, with clear goals and concrete actions,” Xinhua said in a commentary Friday. “Effective measures must be taken to block these pawns of anti-China forces from being elected to (Hong Kong’s) governance architecture, and knock them out once and for all.”
Not that there are many figures left to challenge Beijing: most prominent Hong Kong opposition politicians are being held in jail, where they are awaiting trial on subversion charges related to a primary election last year, which the government claimed was illegal and contrary to national security.

That pre-trial jail time could be a mere precursor to a much longer sentence: the national security law, imposed on the city by the Chinese central government last year, carries a potential life sentence for “grave” offenses of subversion, while those found guilty of lesser offenses can get between three and 10 years in prison.

Speaking after bail hearings for the 47 defendants involved in the case this week, Chan Ho-wun, convenor of Hong Kong’s Civil Human Rights Front, one of the organizers of the city’s massive pro-democracy street demonstrations in 2019, said the government had “lost all conscience.”

“This is a coup, this is subverting people’s choices,” Chan said. “We hope the government can immediately respond to people’s demands.”

In the year since it was introduced, the security law has gutted opposition politics in Hong Kong, stifling protests and public displays of dissent, sending activists into exile, and seeing dozens of prominent figures — and those not so prominent — arrested and facing significant prison terms.

Hong Kong’s de facto constitution, the Basic Law, which sets out the “one country, two systems” policy that has governed the semi-autonomous city since its handover from British to Chinese rule in 1997, states both the city’s leader and its legislature should eventually be elected “by universal suffrage.”

This “ultimate aim” as it is described in the Basic Law has long seemed like a distant goal, one that is growing ever more unattainable.

Speaking this month, the city’s former leader CY Leung denounced the city’s opposition and said Hong Kong’s autonomy and freedoms are all dependent on Beijing, and therefore can be whatever Beijing chooses.

“In Hong Kong the extra autonomous power that we enjoy actually comes from Beijing, and Beijing has to account to all the 1.4 billion people in the whole of China,” he said. “Ignoring the sentiments of the mainland people is self-deception on the part of Hong Kong.”

He added that “by pushing on the democracy envelope too far, and by attempting to chip away the authority of Beijing in, for example, appointing the chief executive, many of the so-called democrats have become, in practice, separatists.”

In a separate interview with Reuters, Leung did not rule out returning to office, saying “I am among millions of Hong Kong people who are eligible” to be the next Chief Executive.

But as Beijing’s recent moves demonstrate, while millions may be eligible, the number of Hong Kongers who China’s leaders trust to actually wield power is vanishingly small, and shrinking by the day.