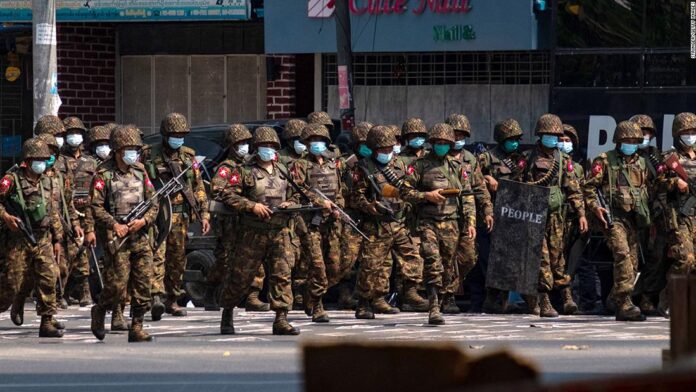 Wednesday was the bloodiest day in four weeks of protests, as security forces opened fire on crowds of people across the country, killing at least 38 people. Images and footage, captured by bystanders, local reporters and citizen journalists, showed bodies lying in the street surrounded by pools of blood as protesters run to take cover. Other clips showed police beating detained protesters and in one piece of footage, security forces were seen beating three medical charity workers with their guns and batons.

“We are seeing a surge in unlawful killings, including apparent extrajudicial executions, with no apparent attempt to rein in the use of lethal force,” Gil said in a statement. “If anything, security forces appear increasingly brazen in their deployment of lethal weapons with each passing day.”

In the city of Myinchan, near Mandalay Wednesday, Zin Ko Ko Zaw was out protesting with his family. Video from that day shows people beating pots and pans near of a line of protesters and security forces, before gun shots ring out and the crowd scatters.

In the melee, Zin Ko Ko Zaw was shot in the head. His brother carried him to a waiting ambulance but it was too late.

“I had to drag his body out and passed away in my hands,” the brother, Than Zaw Oo said. Blood was pouring from his mouth and head.

Zin Ko Ko Zaw would have turned 23 next month. His parents say he was the breadwinner of the family, working in the local market. They were all at the protest together, but were separated when the shooting started.

“We are risking our lives to claim victory. They don’t have any weapons, but they are fully armed. All we can do is protest. They are shooting us with live bullets, please help us,” his mother, Daw Htar said.

CNN reached out to the ruling military regime via email but has not yet received a response. The military junta previously claimed to be showing restraint towards what it termed “anarchic mobs.” The state-run Global New Light Of Myanmar said “severe action will be inevitably taken” against “riotous protesters.”

On Friday, the Myanmar Police Force said in the Global New Light, that “rioters armed with two weapons believed to be smoke grenades” were found to be part of protests on Wednesday. “The protesters were no longer in the normal stage of the protest but were armed with explosive devices and resorted to violence,” the report said, without providing further evidence.

Thousands of people from all sections of Myanmar society have joined the protests and ongoing civil disobedience movements aiming to destabilize the new military regime. The largely leaderless movement, however, is spearheaded by young people who have come of age in the years since the military relinquished a half century of direct rule in 2011, allowing for elections and greater democratic reforms.

They now feel as if their future has been taken away.

Donning masks and flimsy plastic helmets, young people are overwhelmingly at the front lines of the protests, building barricades and staring down security forces. They have suffered heavy casualties.

Activist group Assistance Association for Political Prisoners has identified 48 people who have died because of the violent crackdown on protesters. Of those, half were under the age of 25, with 17 people under 20 years old. The youngest was just 14, the group reported.

While on Thursday, the UN Children’s Fund (UNICEF) said at least five children — all boys between the ages of 14 and 17 — as well as multiple young people and adults had been killed, and at least four children severely wounded. The group condemned “in the strongest possible terms the use of force against children, including the use of live ammunition, and the arbitrary detention of children.”

“Our children’s legs are broken, heads have been injured, they are shot in their chest. We cannot take this anymore, they are intentionally targeting the young people with bright futures,” said Zin Ko Ko Zaw’s distraught mother Daw Htar.

John Quinley, Senior Human Rights Specialist at Fortify Rights said many of those out protesting are young people in their 20s and 30s.

“This is the next generation of Myanmar that want the country to be led and governed democratically. And they want their leaders to uphold human rights principles,” said Quinley. “And these are the people that are dying in the streets.”

One of the youngest killed is 16-year-old Nay Myo Aung. He was protesting with his cousin in Mandalay on Wednesday when police and military dispersed the crowd using tear gas. As demonstrators began to build barricades, police then began firing rubber bullets, as well as live ammunition, his cousin said.

“I got shot with two rubber bullets and so I fell down, and then my cousin tried to lift me up and that’s when he got shot with a real bullet,” said Hein Htet Aung, 17. He added the protesters had been shouting insults at the security forces, but otherwise were peaceful that day.

Nay Myo Aung was rushed to hospital but died a few hours later from his injuries. The bullet shot through his left arm and pierced his lung, doctors told the family.

His brother Ko Ko Lin Maung, 21, said he was a “good boy” who looked after their grandmother following the death of their parents.

“He died for the country, so that’s one thing we can be proud of but I only have this one little brother so I feel very sad about it,” Ko Ko Lin Maung said.

Another victim of Wednesday’s bloodshed was Ma Kyal Sin, known by the name Angel. Wearing a T-shirt that read “Everything will be OK,” Angel had regularly joined protests fighting for democracy, according to her friends interviewed by Reuters. She was shot in the head by security forces during an anti-coup protest that day.

Before she went out protesting, the dancer and taekwondo champion had posted on social media details of her blood group, contact number and a request to donate her body in the event of her death, Reuters said.

Video of her final moments showed her crouching on the street with other protesters, rallying the crowd in Mandalay before tear gas is thrown. The bullets followed.

Her funeral on Thursday drew hundreds of mourners, with throngs of people lining the route of the procession in Mandalay, holding up the three finger salute from the Hunger Games movies, which has been adopted by protesters as a symbol of resistance.

“She was a happy girl, she loved her family and her father loved her so much too,” her friend Myat Thu told Reuters. “We are not in a war. There is no reason to use live bullets on people. If they are human, they will not do it.”

The Myanmar Police Force issued a statement Friday in the Global New Light saying they are looking into Ma Kyal Sin’s death. The report said police analyzed a photo of the injury of the young woman and concluded “it was not an injury caused by a riot weapon.” The statement continued, if her injury had been caused by either a “riot weapon or live ammunition” it would not be possible “for head of the deceased person to be in good condition.”

Rights groups have said the level of coordination and use of force used by the military junta in recent protests indicates they are no longer intending to merely disperse protesters as a form of crowd control.

“The similar use of excessive and lethal force by security forces in towns and cities throughout the country demonstrates coordination between units and an overarching national strategy,” rights group Fortify Rights said Thursday.

Despite the dangers, protesters continue to go back to the streets. On Friday, police opened fire on demonstrators in Mandalay killing one young man, according to Reuters, citing witnesses. In Yangon, protesters were rebuilding barricades and in Shan state’s Lashio, crowds sang songs and held up the three-finger tribute.