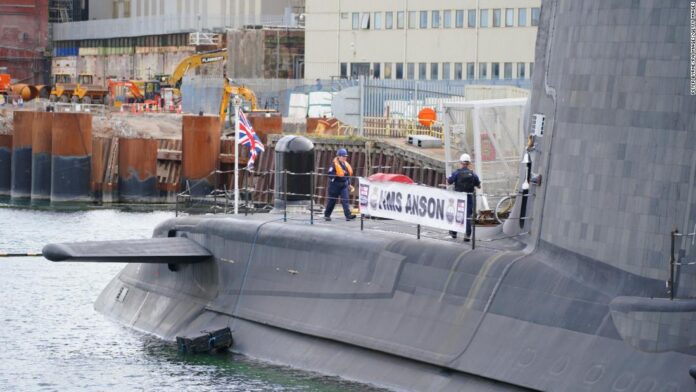 “Today is a significant milestone in the UK and Australia’s preparation to confront growing threats to the liberal democratic order, especially in the Indo-Pacific,” Defense Secretary Ben Wallace said as the Royal Navy commissioned its newest attack submarine, HMS Anson, in Barrow-in-Furness, England.

“Built in a UK shipyard, HMS Anson demonstrates the very best of British industry, sustaining our world-leading sub-surface capabilities and underlining the UK’s readiness to contribute them to shared security, especially with our closest allies Australia and the United States under the AUKUS initiative,” Wallace said.

Marles, who is also Australia’s defense minister, said the “technology, capability and lethality on show is truly impressive.”

“Today’s announcement of Australian submariners training aboard HMS Anson says everything about our future plans of building the AUKUS partnership,” Marles said.

Under the AUKUS agreement, reached last year, Australia hopes to acquire nuclear-powered submarines to add to its fleet by 2040.

The agreement was seen as a major step by the administration of US President Joe Biden to counter China’s increasing naval presence around the Indo-Pacific, though the three allies said it was not specifically aimed at Beijing.

“More will follow next year, before Australian submariners go to sea. The training and exchanges mark the beginning of a multigenerational naval partnership between the three AUKUS nations,” the ministry said.

“From the Pacific Ocean to the Baltic Sea, our submarine service is protecting the UK and our allies 24 hours a day, seven days a week, and the deployment of Australian submariners alongside our British crews epitomizes the strength of the AUKUS partnership,” British Prime Minister Boris Johnson said.

The design of the planned Australian nuclear-powered submarines has yet to be determined. It could be similar to the UK’s Astute-class subs, the US Navy’s Virginia-class attack subs, or a new vessel specific to Australia.

HMS Anson is the fifth of seven Astute-class nuclear-powered attack submarines planned for the British fleet. The 97-meter (318-foot) sub will be armed with a mix of 38 torpedoes and Tomahawk cruise missiles that can hit targets as far away as 1,000 kilometers (621 miles). Its nuclear reactor will not have to be refueled for 25 years, according to the Ministry of Defense.

The ministry put its price at $1.5 billion.

“Given the world we live in, there is no more important tool in the United Kingdom’s arsenal: silent, unseen, and a key instrument of our global, modern, ready Royal Navy,” Key said.