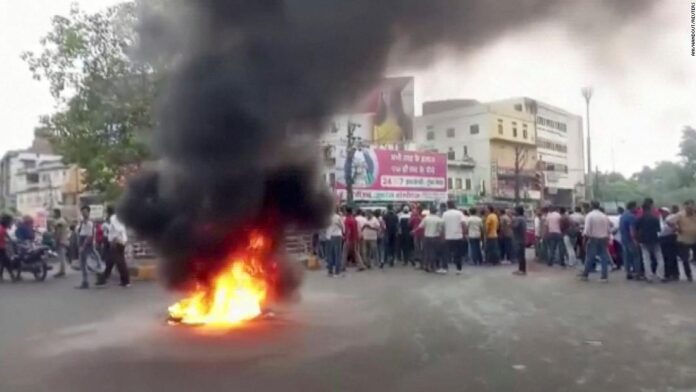 Officials in the western city of Udaipur, Rajasthan state, announced a curfew and blocked internet access after videos of the incident went viral on social media, triggering mass outrage across the country.

In one video, two men can be seen beginning to attack the victim. In another, two Muslim men appear to confess to the crime and claim to have “decapitated” the Hindu man. However, police in the state told CNN Wednesday the victim had deep cuts all over his body, including slashes on his neck, but that he had not been beheaded.

India’s Ministry of Home Affairs on Wednesday said it had directed the National Investigation Agency — the country’s main anti-terrorism task force — to investigate the case.

“The involvement of any organisation and international links will be thoroughly investigated,” it said on Twitter.

The victim was arrested on June 12 for allegedly “inflaming religious sentiments” and had since been released on bail, Ghumaria said.

The two suspects have been arrested and an investigation is underway, the state’s Chief Minister Ashok Gehlot, wrote on Twitter on Tuesday.

Authorities in the state have responded by deploying more than 600 policemen to the area.

“This incident is very shameful,” Ghumaria said during a news conference Tuesday, before urging the public not to watch the videos and appealing for calm.

“There will be tension. There always is after such an incident, but it is all under control,” he said.

The killing has reignited the flames of an already volatile situation between India’s Hindu majority and its minority Muslim community, that make up about 14% of the country’s 1.3 billion population.

Asaduddin Owaisi, a lawmaker and president of the All India Majlis-e-Ittehadul Muslimeen political party, condemned the killing and demanded the “strictest possible action” against the suspects.

“There can be no justification for it,” he wrote on Twitter Tuesday. “Our party’s consistent stand is to oppose such violence. No one can take the law into their own hands.”

Leader of the opposition Congress party Rahul Gandhi said he was “deeply shocked” by the incident.

“Brutality in the name of religion cannot be tolerated,” he wrote on Twitter. “We have to come together to defeat hatred. I appeal to everyone to please maintain peace and brotherhood.”

Hindu-Muslim tensions have remained a constant throughout India’s modern history, occasionally erupting into violence, but analysts and activists say relations have worsened since Prime Minister Narendra Modi and his BJP rose to power with a Hindu-nationalist agenda in 2014.

Since then, the ruling party has been repeatedly accused by rights groups, activists and opposition parties of stirring anti-Muslim sentiment.

The BJP said in a statement on its website earlier this month that the party respected all religions. “The BJP strongly denounces insult of any religious personalities of any religion,” it said.

Earlier this month, India scrambled to contain the diplomatic fallout as at least 15 Muslim-majority countries condemned Sharma’s remarks about the Prophet Mohammed. The incident sparked uproar among India’s key Arab trading partners and calls from around the Gulf to boycott Indian goods.

Protests over her comments grew deadly in India after two Muslim boys were killed in eastern Jharkhand state this month, with an investigation underway to determine who fired the fatal bullets.
The BJP suspended Sharma, and India’s Foreign Ministry issued a statement saying her comments “do not, in any manner, reflect the views of the government of India.”