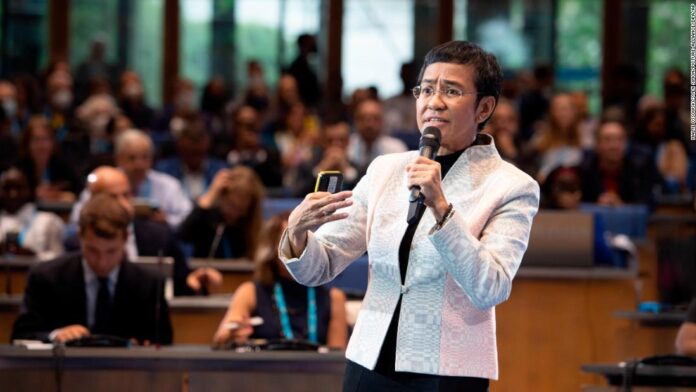 Ressa, CEO and founder of Rappler, released a statement during the East-West Center’s International Media Conference in Honolulu saying the Philippine Securities and Exchange Commission (PSEC) had upheld its earlier ruling to revoke the news site’s operating license.

A former CNN bureau chief and TIME Person of the Year, Ressa said the team will appeal this decision, “especially since the proceedings were highly irregular.”

“What does this mean? We have existing legal remedies all the way up to the highest court of the land. It is business as usual for us since in our view, this is not immediately executory without court approval,” Ressa wrote in an internal announcement to Rappler staff.

Ressa has been engulfed in legal battles in recent years and has said she has been targeted because of her news site’s critical reports on outgoing President Rodrigo Duterte’s administration.
In January 2018, the Philippine SEC revoked the registration of Rappler over alleged violation of foreign ownership rules. The newsroom continued to operate despite the revocation.

The SEC alleged that Rappler’s parent company “intentionally created an elaborate scheme” to cover an investment from a foreign source, and that the organization is a “mass media entity that sold control to foreigners.”

Constitutionally, mass media companies in the Philippines are blocked from foreign ownership.

The investment in question came from the Omidyar Network, a investment vehicle created by eBay founder and entrepreneur Pierre Omidyar, Rappler said at the time.

Rappler denied foreign ownership, and said the Philippine Depositary Receipt (PDR), a financial instrument that governs the Omidyar investment, did not give the network any control over the company. It said the arrangement was accepted by the SEC in 2015.

In an order released on Wednesday, the Philippine SEC “affirmed and reiterated its earlier finding” from 2018 that Rappler is a “mass media entity” and it had granted control to a foreign entity “through the Philippine Depositary Receipt issued to Omidyar Network.”

“Rappler and RHC willfully violated the constitution … when they granted Omidyar control,” the order said. “Considering the seriousness and gravity of the infraction, and that it was no less the constitution that was violated, this commission finds and so holds that the penalty of revocation … should be affirmed and sustained.”

The ruling comes a day before Duterte leaves office and incoming President Ferdinand Marcos Jr. assumes the Philippine presidency on June 30. Media groups have urged Marcos, the son of former dictator Ferdinand Marcos Sr., to protect media freedom in the country but some observers have expressed concern about his relationship with the press.

In a news conference on Wednesday, Ressa said Rappler had been repeatedly harassed over the past six years and “our goal is to continue holding the line.”

“This is intimidation. These are political tactics. We refuse to succumb to them,” she said. “We’re not going to voluntarily give up our rights. And we really shouldn’t. I continue to appeal for that because when you give up your rights, you’re never going to get them back.”

Francis Lim, Rappler’s legal counsel, told reporters “we strongly disagree with the decision” and there are “legal remedies available to question the decision before courts of law.”

Rappler and the Philippines

Ressa won the 2021 Nobel Peace Prize, along with Russian journalist Dmitry Muratov, for her efforts to safeguard freedom of expression in the Philippines. She founded Rappler in 2012 and it gained prominence for its unflinching coverage of Duterte and his brutal “war on drugs.”
Press freedom in the Philippines deteriorated rapidly under Duterte, and the country now ranks 147th out of 180 countries on the Reporters Without Borders (RSF) press freedom index.
In 2020, one of the Philippines’ largest and most influential broadcasting networks, ABS-CBN, was forced off the air and ordered to cease operations after it was denied a new broadcast license.
Ressa has often spoken out about the challenges she and Rappler have faced covering news in the Philippines. She has been hit with a host of legal challenges that are widely considered to be politically motivated, including a cyber libel conviction that could see her jailed for six years and alleged tax offenses.
“Journalists have been targeted in ways that we’ve never gone through since the days of (Marcos Sr.). In less than two years I’ve had 10 arrest warrants against me and I haven’t done anything different from what I’ve been doing (before),” she told CNN in 2021.