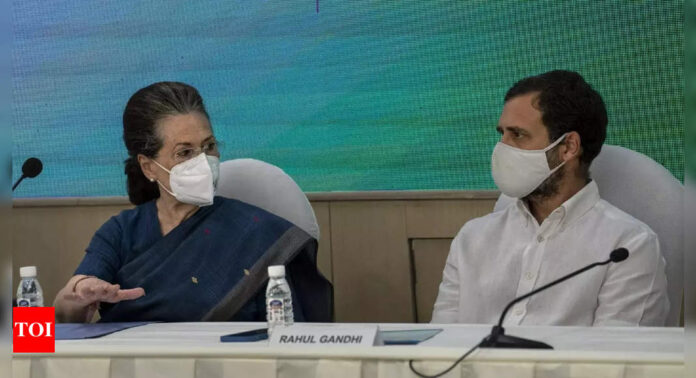 NEW DELHI: A clash erupted in Congress over the upcoming elections to the post of party president, with three MPs publicly demanding that the electoral rolls be made public, and the party rejecting it by saying that the practice has never existed.
After G23 leader Anand Sharma made the demand in Sunday’s CWC meeting, another dissident Manish Tewari on Wednesday said it be done in the interest of “free and fair polls“, and to help potential candidates who would need signatures of 10 delegates to file their papers. He found support from Shashi Tharoor and Karti Chidamabram, son of veteran P Chidambaram.
AICC central election authority chairman Madhusudan Mistry said that electoral college of PCC delegates could be viewed at state headquarters, while the consolidated list would be provided to candidates. AICC general secretary incharge of organisation KC Venugopal rejected the demand to publish the rolls. “This is an in-house procedure, and it is not supposed to be published for all to see. There is no such practice. We will continue to follow the old practice,” he said.
“How can there be a fair and free election without a publicly available electoral roll? Essence of a fair and free process is names and addresses of electors…” Tewari tweeted, adding, “Why should someone have to go to every PCC office in the country to find out who the electors are.”
Tharoor said, “I think it’s important… everybody should know who can nominate and who can vote. There is nothing wrong with that.” While tweeting that “reformists are not rebels”, Karti said, “Every election needs a well-defined and clear electoral college… An ad hoc electoral college is no electoral college.”
Tewari also asked why CWC announced the schedule of the president’s election, but not of 28 PCCs and eight territorial Congress committees.