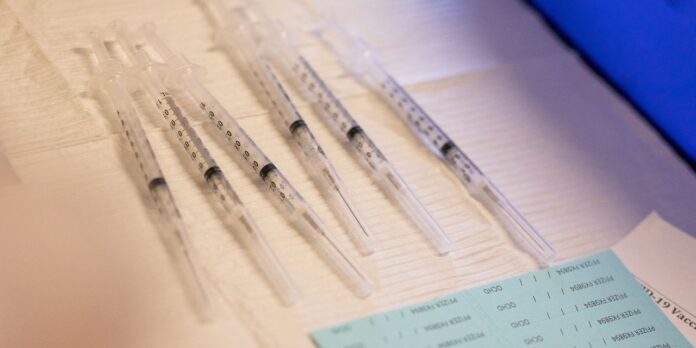 U.S. health regulators cleared use of retooled Covid-19 vaccines that target the latest versions of Omicron, in preparation for a fall booster campaign that could start within days.

and people 18 and older to receive a

booster at least two months after their most recent dose.

The clearance marks the first changes to the composition of the Covid-19 vaccines since their distribution began in the U.S. in December 2020.

The action also makes the booster doses widely available, rather than limiting them to people who are at high risk of developing severe disease, as earlier booster authorizations had done.

“As we head into fall and begin to spend more time indoors, we strongly encourage anyone who is eligible to consider receiving a booster dose with a bivalent Covid-19 vaccine to provide better protection against currently circulating variants,” FDA Commissioner

The shots are known as bivalent vaccines because they target both the original strain of the virus that emerged in China in late 2019 and the Omicron subvariants.

Health authorities have been preparing to roll out the rejiggered boosters to protect people from the virus in the fall and winter, a period when cases have often ticked up as people spend more time indoors.

A personal, guided tour to the best scoops and stories every day in The Wall Street Journal.

To better defend against the elusive Omicron variant dominant in the U.S., the authorities in late June directed the vaccine makers to tweak their shots to target Omicron’s BA.4 and BA.5 subvariants, as well as the virus’s original strain.

FDA officials said the goal for the altered vaccines is to protect people for a longer period of time and more fully—even against symptomatic infection—than the original vaccines would have if given again as boosters.

The reformulated vaccines targeting the now-dominant BA.4 and BA.5 subvariants are likely to be a closer match to future variants that may evolve this winter, said Peter Marks, who heads the FDA’s vaccines division.

“In terms of trying to stave off serious outcomes and symptomatic disease, one needs to refresh the immune system with what is actually circulating,” he said.

Yet many people might resist seeking another shot, partly out of weariness with getting repeat inoculations. Another possible factor: The FDA cleared the doses without waiting for results from the kinds of clinical trials conducted before earlier authorizations.

The trials aren’t necessary to be confident the vaccines will work safely, many vaccine experts have said, because the changes simply update proven shots. The process is similar to the development of annual flu shots, which are given without testing them in people.

“The FDA has extensive experience with strain changes for annual influenza vaccines,” said Dr. Marks. “We are confident in the evidence supporting these authorizations.”

Both vaccines are based on gene-based messenger RNA technology. The quick turnaround time to produce them in a few months was a new test of the plug-and-play potential of the technology.

“It is, of course, very important to have adaptive vaccines,” BioNTech Chief Executive

said. “The reason is the virus is really rapidly evolving, and Omicron has collected a lot of mutations—in the meantime, additional mutations, in BA.4\5—and we have to catch up.”

called the authorizations “another important milestone in our ongoing efforts to provide protection against this virus.”

said the company’s new booster will provide broader protection against forms of Omicron.

The authorities have looked to the updated shots to provide stronger protection against BA.4 and BA.5, after research found that current vaccines weren’t as effective against the subvariants as they had been against earlier versions of the virus.

Before people can begin to receive the shots, a panel of vaccine experts advising the Centers for Disease Control and Prevention is scheduled to meet Thursday and Friday to discuss the FDA’s authorization.

Many hospitals, pharmacies and other vaccination sites would start providing the shots after the panel and then the CDC director signs off.

The vaccines are slated to be available where people can currently get shots, including hospitals, doctors’ offices and pharmacies. States are already eligible to preorder supplies.

People would be able to get the shots at no charge, as has been the case to date in the pandemic.

The new versions of the shots would be available as boosters, but people seeking an initial series vaccine would continue to receive the original shots. The FDA is no longer authorizing the original formulations of the vaccines as boosters for people 12 years and older.

The FDA sanctioned a two-month gap between the new boosters and a recipient’s last vaccine dose, Dr. Marks said, to maximize the immune response to the shots and reduce the rare risk of the heart inflammation condition known as myocarditis.

Public-health experts have expressed hope that the updated shots could improve the country’s booster rate, which has remained static the past few months.

More than 108 million people have received at least one booster shot, just under half the number of people who received an initial series, according to the CDC.

Yet the inoculation campaign faces challenges, including fatigue from many in the U.S. who are tired of getting shots.

Some 57% of vaccinated people surveyed in July said they wouldn’t get a booster because they believed their initial vaccination or a prior infection provided enough protection, the Kaiser Family Foundation said. Meanwhile, 52% said they just didn’t want a shot.

Health authorities have expressed hope that they could increase uptake by combining Covid-19 boosting with the medical visits people make to receive annual flu vaccinations. Updating vaccines, according to health experts, could also encourage people to get their boosters.

Moderna, as well as Pfizer and BioNTech have started separate trials testing their shots in people.

Pfizer and BioNTech said studies in animals found a booster dose of the modified vaccine generated a strong immune response against the original strain, BA.5 and other Omicron subvariants. Moderna said testing of a shot modified to target the original strain and Omicron’s BA.1 subvariant found a stronger neutralizing antibody response against BA.5 and other subvariants compared with the company’s current vaccine.

Pfizer and BioNTech plan to ask the FDA to green light a retooled vaccine for children 5 years to 11 in October and are in talks with the agency to prepare a request for children under 5, the companies said. There will be a pediatric group in the clinical study, a spokeswoman said. Moderna plans to ask the FDA to authorize its retooled vaccines for adolescents and children in the coming weeks, a spokesman said.

Authorizations for children of younger ages are expected by the end of October, a person familiar with the matter said.

—Peter Loftus contributed to this article.