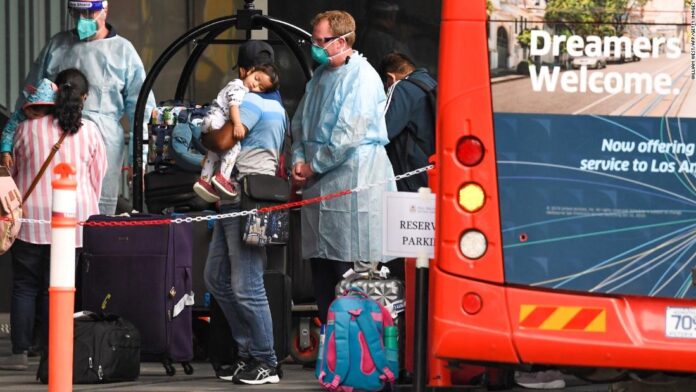 Sydney (CNN) — When my plane finally touched down in Sydney, I was overwhelmed by a sense of disbelief.

After learning two of my family members had become seriously ill, I spent over six months planning what seemed like an impossible journey from Europe home to Australia.

A series of flight cancellations and hours spent reading horror stories from stranded citizens abroad who had lost jobs, visas and homes while waiting for a flight had left me convinced I would never make it.

Taking advantage of its geographic isolation, Australia closed its borders to international travelers early in the pandemic and barred most citizens from leaving. Under the current restrictions, only passport holders, permanent residents and those coming in on business or study exemptions are permitted to enter.

A hotel quarantine scheme run by state governments has been in place since March 2020, and it is widely regarded as playing a key role in Australia’s successful containment of Covid-19.

Australia has improsed a strict cap on arrivals, allowing only 6,362 people to enter the country per week.

The arrival caps, which currently allow 6,362 arrivals nationally per week, have created a bottleneck of stranded Australians forced to compete for a limited number of seats.

Nearly 40,000 Australians are still trying to return according to the Department of Foreign Affairs and Trade (DFAT).

Due to the cap on arrivals, I was one of just three people to secure an economy class seat on my flight from Zurich to Singapore, and one of a dozen or so to make it onward to Sydney.

Luck of the draw

Arriving passengers are greeted by officials then transported to a quarantine hotel by bus.

It doesn’t matter if you flew first class, or economy like I did. Money and circumstance play almost no role in determining which hotel travelers will be assigned to.

Food is included in the quarantine fee, with passengers receiving three meals per day to their hotel room door. Whether you end up in a lavish suite with gourmet meals and harbor views, or a cramped, windowless room with inedible fare, all comes down to luck.

On arrival into Sydney my flight was greeted by members of the state police, army, navy and air force, before everyone was loaded onto a bus without open windows. After approximately an hour of waiting onboard, we drove off into the night, but were not told our final destination.

Every passenger on my flight ended up quarantining at the Sheraton Grand Hyde Park Sydney, a very comfortable five-star hotel offering city views. Like most urban hotels though, my room — while luxurious — did not have opening windows or a balcony, which meant I couldn’t access fresh air for 14 days.

In recent months, breaches in Australia’s quarantine system in Sydney, Melbourne, Brisbane, Adelaide and Perth have occurred, leading to a spate of infections among hotel staff, cleaners and security guards. These have raised concerns over the lack of ventilation within city hotels, and the heightened risk that poses in terms of aerosol transmission.

In early February, there were two incidents of guest-to-guest transmission in hotels, after a woman in Melbourne reportedly contracted the virus from a family located in a room across the hotel hallway, and in a separate incident, a traveler in Sydney tested positive two days after leaving quarantine, indicating that he likely caught the virus during the final days of his stay, rather than it being a rare late-blooming infection.

Charging a premium for rooms with access to fresh air is common practice among hotels.

Considering these recent outbreaks, and how highly transmissible new strains entering the country, such as the B.1.1.7 variant are, access to fresh air was the only thing I had hoped for in my hotel assignment.

When I asked guest services at the Sheraton about the possibility of moving to a room with balcony access, I was advised it would cost an extra $400 AUD per night to upgrade.

Speaking with several other travelers who have gone through the quarantine system in Sydney, I learned that charging a premium for rooms with access to fresh air was common practice among hotels, as a way to increase profit margins.

I contacted the Marriott International, which owns the Sheraton Grand hotel, to ask about this practice, but received no response.

Despite the lack of fresh air, my overall experience in quarantine was relatively positive. The staff were kind, the room was comfortable and I was provided with a desk to work at. Other travelers I spoke to, however, were not as fortunate.

Amelia Seeto spent $28,500 AUD (roughly $22,130 USD) on mandatory quarantine and flights for her family of four to get home to Sydney from the UK. Despite traveling with two highly active toddlers, she says her and her husband were placed in a small room in Sydney’s Mantra Hotel, with no opening windows or a balcony.

“The system is flawed and unfair,” she said. “They put families in rooms that are substandard while the best rooms stay empty. Hotel management told me they had all these empty rooms on the top floors but we couldn’t move there because everyone gets allocated to their floors.”

Passengers flying into Australia have no idea which hotel they will be assigned to.

Seeto says she tried to appeal to the New South Wales Police stationed at her hotel, who were in charge of approving any accommodation changes, to allow her family to move into a room with access to fresh air, but her requests were denied.

“I was in a room with no balcony and two screen-free little boys who needed fresh air. The nurses appealed to the police to move us and their claim was rejected twice,” Seeto said via phone.

Anastasia Aubert also traveled to Sydney with a family of four in February, but unlike Seeto, she said her experience was “very positive,” as her family were given a large apartment with two balconies at the Meriton Suites Pitt Street, which came with a full kitchen and laundry facilities.

The most common hotel quarantine complaints among other travelers I spoke with related to the lack of fresh air, suitable ventilation in rooms and the quality of the food being served.

Anthony, who requested CNN only use his first name, quarantined at the Novotel Sydney Central in December after flying to Australia from New York. He said via email that his hotel room was visibly dirty on arrival, and that the ventilation was so poor he had trouble breathing.

“The air conditioning unit in my room had no fresh air provision, I looked into the ceiling and saw no ductwork connected. I took out the filter and it was caked with dirt. The condition of my room was unsanitary with urine on the toilet. I had to clean the toilet and the air filter myself.”

Anthony says he requested to be moved to a room with an operable window or balcony after experiencing tightness in his chest from the lack of ventilation, and eventually his request was approved.

He was so disturbed by his overall experience though, that he says he wrote to Australia’s Minister for Health, Greg Hunt, and the New South Wales Ombudsman — the state’s watchdog tasked with addressing problems in government agencies — to lodge a formal complaint.

“The conditions of the hotel rooms do not comply with minimum international standards for detainees — even prisoners get fresh air,” Anthony wrote in his letter, citing section 11(a) of the United Nations Standard Minimum Rules for the Treatment of Prisoners, which stipulates that prison windows “shall be large enough to enable the prisoners to read or work by natural light, and constructed so they can allow the entrance of fresh air whether or not there is artificial ventilation.”

The New South Wales Ombudsman was unable to investigate Anthony’s complaint however, as while the quarantine system is run by the state government, the Ombudsman has no authority to investigate private businesses that are involved in running it.

CNN has reached out to Novotel owner Accor for a response to his claims.

Not a fan of the food? Fortunately, travelers in quarantine are allowed to receive care packages.

Professor Jason Monty, head of Melbourne University’s Mechanical Engineering department, has spent months analyzing airflow systems across medical wards in Victoria, and is considered a leader in the study of how poor ventilation can influence aerosolized transmission of Covid-19 particles.

Monty said that from an infection-control standpoint, the ventilation in most city hotels is extremely poor, and that state governments should start investing in open-air quarantine facilities, such as the Howard Springs facility in the Northern Territory, which is a former gas plant workers’ village now being used to house those returning from overseas.

“Hotels often have what’s called positive pressure in their rooms, which means air is trying to get out because the ventilation system is weak,” he said.

“It’s a gap in the system that we’ve been pushing pretty hard for the government to respond to since, June-July 2020,” he added, referencing the recent cluster outbreaks in several hotel quarantine settings.

How other countries compare

Many countries have implemented enforced mandatory quarantine or self-isolation upon arrival since early on in the pandemic, however some are far stricter than others.

In South Korea, travelers are required to self-quarantine for 14 days, but can do so in a private setting as long as it is deemed suitable by state authorities. Those who fail to organize appropriate accommodation are put into government-run facilities at their own expense.

Hong Kong tightened its already strict quarantine measures in December 2020. Incoming residents must now book a room and board for 21 days at one of 36 pre-approved hotels chosen by the government, one of the strictest quarantine measures in the world. Travelers are able to select an accommodation based on their budget/room preferences.

Thailand, which has recently re-opened its borders to tourists willing to quarantine for 14 days, provides a long list of government-approved quarantine hotels that guests can stay in at their own expense.

The approved options are accessed via an online portal, and travelers can search for hotels based on budget, location, size and available in-house facilities.

All travelers — including British citizens — who arrive in England from “high-risk” coronavirus countries now have to quarantine in hotels for up to 10 days, but supervised departures from the rooms are permitted for fresh air.

Like Thailand, the UK government offers a list of approved options, however the cost of the hotel quarantine is fixed.