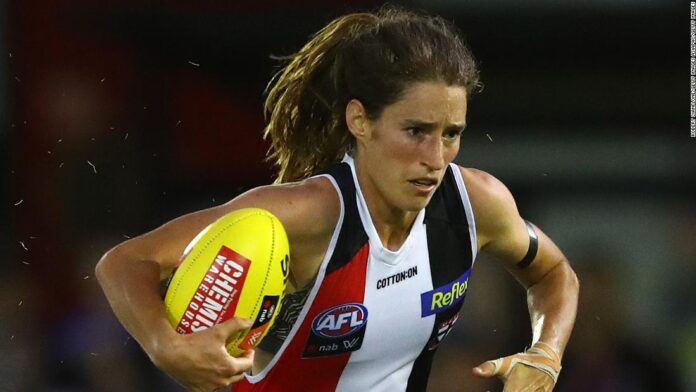 A rarity in the sporting world, Phillips is a multi-sport athlete, who competes in both ultimate frisbee and Australian football.

While the Australian Football League men’s competition was founded in 1896, the women’s inaugural season didn’t kick off until 2017.

For some AFL fans the idea of women showcasing their handling and kicking skills with the oval-shape ball has come as a bit of a culture shock, according to Phillips.

No wonder, perhaps, that Phillips feels so strongly about gender equality.

“That, to me, is just the lack of education,” adds the 29-year-old, who points out that perhaps if these men hadn’t grown up playing Aussie

football and were working full-time and training in the evening, the same way the women are, the quality of the league would be different.

Phillips is also the co-founder of the Australian Ultimate League — the only mixed-gender, semi-professional field sport in the world.

And somehow, the two-sport star also finds the time to work as an engineer.

Ultimate frisbee is a self-officiated sport that is played mixed-gender at the highest level — the World Games.

However, many semi-professional leagues have opted for single-gender competition, making what Phillips has done in Australia special.

Phillips says her experience in ultimate frisbee has been more positive than it has been in the AFLW when it comes to issues of equality.

Born in London, Phillips grew up in Melbourne, where she discovered her love of ultimate frisbee in high school before she was selected for the ALFW’s inaugural season during a talent search.

“I think I took it for granted that a lot of parts of ultimate are very equal, relatively speaking, and that was something that I really loved about it at the beginning. But I probably didn’t recognize the importance of it until I moved into football.”

However, she appreciates the platform the ALFW has given her.

“Coming into the AFLW, I saw the impact that we had on young girls but also on young boys — people who all of a sudden were looking at the league and had female role models that they could look up to — and that has really impacted me,” said Phillips.

As captain of the Australian women’s ultimate frisbee team and the captain of St. Kilda FC in the AFLW, Phillips is determined to use her leadership positions to help create change.

“For me, it’s not even about the players that are playing in the league. Obviously, I want equality for them, but it’s more about the broader impact of it.

“Kids who, at eight or nine … [who see] it’s normal that you would have women playing at that level. And I think that’s really powerful and I feel very strongly that we need to keep moving forward in that area.”

As ultimate frisbee has grown over the last decade, semi-professional leagues have begun to pop up around the globe.

The American Ultimate Disc League (AUDL) was founded in 2010 and played its inaugural season in 2012.

But the league was created for men’s teams only, although it did allow women to try-out for teams.

Despite discussions and a push from the ultimate community to add women’s teams to the league, the AUDL has remained a men’s league.

In 2018, when Phillips started the Australian Ultimate League (AUL), she opted for a different approach, creating the world’s first mixed- gender league in the world to provide an equal opportunity for men and women to compete.

In the years that have followed the AUL’s creation, women’s leagues such as the Premier Ultimate League (PUL) have been set up in the US.

What Phillips has done by creating a mixed-gender league is not only in line with the sport’s highest level — it’s played as a mixed sport at the World Games — but also with the International Olympic Committee’s vision to create a more gender-equitable Games by including more mixed events.

And, as ultimate strives for inclusion in the Olympic Games, Phillips believes it is important for the sport to show that it’s unique — and that women can compete with men on the same field.

Despite the fact she holds the position of captain on two sports teams, Phillips says the idea of leadership didn’t come easily.

“I like to keep to myself a little bit, but again the more involved I’ve got in footy and in ultimate, and in thinking about gender equity in particular, it’s definitely become more important to me,” she explains.

“I look at a lot of the young players that are coming through both in footy and in ultimate, and I just see so much potential in them.

These days it isn’t easy being a female leader.

In early 2020, the online abuse of AFLW players became so bad that some organizations had to shut down their comments sections.

Notably a photo of Carlton Blues player Tayla Harris, which captured her athleticism, gained significant negative attention and Australian broadcaster Channel 7 removed the post after only 24 hours as the comments had become too difficult to monitor.

Phillips says social media doesn’t play a big part in her life, which has ensured she hasn’t been as affected as other athletes who have suffered abuse.

“Obviously, I know that it’s there and I think you only have to read the comments on one article posted online to get a broad view of the things that people think.”

She also believes there’s a groundswell of support for the AFLW and says that it’s just a matter of time before the league is given the recognition and respect it deserves.

“One, the quality will keep going up,” reflects Phillips. “And two, I think the more people get exposed to it and start to understand a bit more about the differences between what the men and the women are doing, the feel about it in the community will change.

“There are a whole lot of people that are very supportive and very much on board with the league.

“And I tend to engage with those people, because they love what we’re doing, and I think it’s much more positive to keep focused on that.”

According to Phillips, the number of women playing Australian Football at grassroots level has increased significantly.

“Even if you just walked down to the local park five years ago, you would only have seen men or boys playing the footy and now you’ll see girls everywhere kicking the footy.”

Phillips has a 10-year vision that AFLW players will mostly be full-time and don’t have to balance careers while competing, though she admits that such a prospect is unlikely for ultimate frisbee.

“I think the cool thing here in Australia with ultimate is looking at the development of our youth pathways,” said Phillips.

“Back when I started, there were a handful of people playing at my age. I think there were only about four in Victoria, where I come from.

“Now we have teams in every state in Australia and they have a youth national championship.

“That’s just bringing more people into the game younger and it’s the same with the AFL; the earlier you start playing, the better you’ll get.”

Phillips is currently competing in the AFLW season, with the goal of winning the Premiership trophy at the end of April, all while she continues to train for her other goal of competing in her third World Games for Australia in ultimate in 2022.