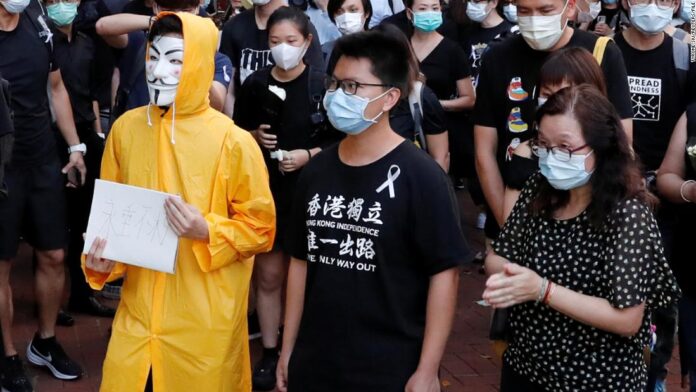 District Court Judge Stanley Chan ruled in October that former delivery man Ma Chun-man, 31, was guilty of inciting secession due to the slogans he chanted, placards he held and the statements he made to media.

“The defendant was incited by some politician and he eventually became an instigator himself,” Chan said, without naming the politician. “In this context, it’s hard to guarantee there won’t be other Ma Chun-mans.”

Ma had pleaded not guilty and did not testify.

One of his lawyers, Chris Ng, told reporters he was not sure whether Ma would appeal.

“I do not feel any regret,” Ma wrote in a letter to the judge, which he signed with his nickname.

“On my road to democracy and freedom, I can’t afford to be a coward,” he said in the letter, part of which was read out in court before he was sentenced to five years and nine months in prison.

The law punishes anything China sees as subversion, secession, terrorism and collusion with foreign forces with up to life in prison and has been widely criticized as a tool to purge political opponents and crush individual freedoms.

Beijing maintains rule of law, and all rights and freedoms remain intact and says the legislation was needed to plug loopholes in national security and end the often-violent unrest, which it says was fomented by foreign forces.

Ma’s conviction was the second under the law.

In the first, former waiter Tong Ying-kit, was jailed for nine years. He had ridden a motorcycle into a group of policemen, displaying the slogan “Liberate Hong Kong, revolution of our times,” which the court ruled was “capable of inciting secession”.

Tong, who was also convicted of terrorism for allegedly using his motorcycle as a weapon, is appealing.

In Ma’s case, the court was shown videos of him chanting “Hong Kong Independence, the only way out”. A notebook titled “Captain America’s Diary of Resistance” was also seized.

Another defense lawyer, Edwin Choy, called for lenience before the sentencing, saying Ma’s slogans and chants were empty words with no great impact. Ma did not commit violent acts and was not someone who would promote violence, Choy said.

More than 100 people, including many of the city’s most prominent opposition politicians and activists, have been charged under the security law. Most have been denied bail.