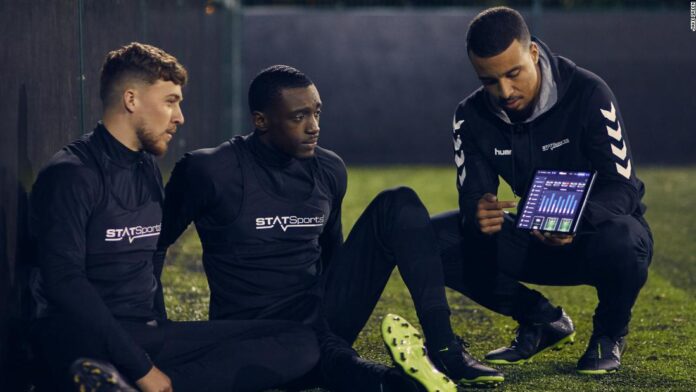 Until recently, gathering athletes’ performance data was a laborious process. Coaches and sports scientists would spend hours compiling information from games and training sessions, pulling out the information relevant to their players’ development. But technology-based performance analytics has changed all that.

These days, athletes can wear devices or vests with GPS-tracking capabilities that record the speed and distance they run, as well as the impacts on their body. The information helps coaches develop training plans to avoid athlete fatigue and maximize performance for match days.

STATSports, a company based in Northern Ireland, is a leader in the performance analytics industry. Most teams in the English Premier League (EPL) use its technology, as do top rugby and American football teams.

In 2018, the firm secured a five-year deal with the US Soccer Federation, reported to be worth £1 billion ($1.2 billion) which STATSports said would see millions of US players at all levels using its devices.

“When we started the company 12 years ago, this technology was in its infancy,” STATSports co-founder Sean O’Connor told CNN Business. “Now, it’s common throughout most sports at all levels and it’s now about being able to get the maximum from it.”

The company’s Sonra 3.0 software released in 2020 lets teams view data almost instantly from an iPad or Apple (AAPL) Watch, so that even during competition, players and coaches can get feedback and adjust tactics mid-game.

Tom Allen has been Arsenal Football Club’s lead sport scientist since 2017. He says players, as well as coaches, are now showing an interest in performance data.

“When I first started, no one [player] was really too bothered about these statistics,” he said. “Now, everyone is used to seeing information sent to the phones and they take a key interest in how they’re improving.

Over the past year, the technology has also been used to track performance away from the training ground. As the United Kingdom went into lockdown in March 2020, and the English Premier League was temporarily suspended, clubs used STATSports devices to keep track of their players as they trained remotely.

“We went through a very tough regime to try and get them ready for what was going to come along the line post-Covid,” Allen explained. “We had a leader board within the group and we teamed everyone up together and you saw the competition go through the roof.”

While the league was suspended, STATSports compiled a “player proximity report” that showed how much time during training sessions players spent within two meters of each other — the minimum distance recommended by the government’s social distancing policy. The EPL presented the data to the government as part of its efforts to restart the league.

The sports analytics industry could be worth $4.6 billion by 2025, according to Grand View Research, with the technology starting to filter down to the amateur level.

Companies such as Australia’s Catapult — which also works with EPL teams — and STATSports have developed systems targeted at the amateur market, letting users compare their performance to their peers and to professionals.

“You can create a league with your friends, you can compare yourself to the elite pros as well, and gauge where you are in relation to that,” says O’Connor. “There’s a huge appetite for that and it’s growing.

“That underbelly of kids and youth football players is where the next wave of technology advances will come.”