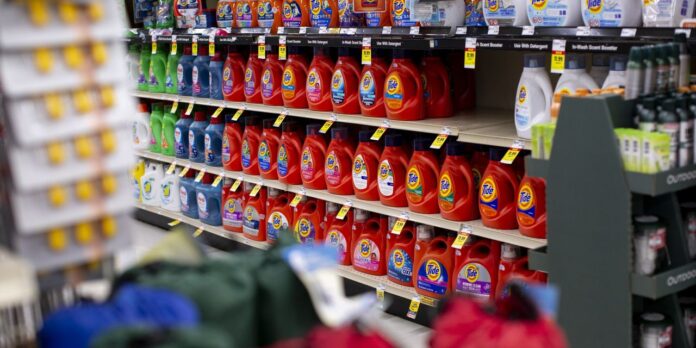 is testing the bounds of what consumers are willing to pay for high-end household products.

For decades, P&G has dominated laundry aisles with detergents that often cost more than twice that of rival brands. It has raised prices in recent years on products like Tide with little resistance from consumers, growing sales volume and gaining market share in the process.

But in recent weeks, sales of premium detergents have been on the decline, industry data show, and consumers are increasingly picking up cheaper brands or powdered detergent. It is the latest sign that shoppers are shifting how they spend money, even on essential items, as inflation remains near four-decade highs.

“I won’t deny at all that certain consumers will make changes on the margins,” P&G Chief Executive

said. P&G’s strategy, he said, focuses on churning out products that outperform competitors and are essential to daily life. “It’s hard for me to understand how superiority in these categories becomes irrelevant,” he said.

U.S. sales of premium detergent brands fell nearly 3% in the four-week period ended Aug. 7, while cheaper price categories were either flat or growing, according to research firm IRI.

Recent shifts in laundry-detergent buying aren’t likely to change P&G’s market dominance. P&G has a nearly 60% share of the U.S. liquid-detergent market and an 80% share of the market for single-dose laundry pods, which are typically more expensive per load than liquid detergent. The company also makes lower-priced detergents.

P&G this summer raised detergent prices by close to 10% from a year ago, according to retail data-tracking firms.

Despite the higher prices, organic sales, a measure that strips out deals and currency moves, for the unit increased 9% in the June quarter from the prior year. But for the first time since the summer of 2018, sales volumes dropped for the unit, falling by 1%.

for years referred to herself as a “Tide girl,” a loyal buyer of P&G’s pricey orange-bottled liquid laundry detergent. Ms. Bianrosa, a bank employee living in the Bronx borough of New York City with her 3-year-old daughter, now hunts for bargains and usually buys lower-cost brands.

“I was, like, ‘You know, let’s do something cheaper,’ ” said Ms. Bianrosa, 40 years old. She often used Tide or Dreft, a P&G detergent designed for children’s clothes. “Everything is getting so expensive.”

Laundry-soap prices vary widely. Liquid detergent ranges from less than $1 for 16 ounces of detergent for the lowest-cost, value brands, which includes Arm & Hammer, to more than $2 for the same amount for premium brands like Tide and Persil, owned by Germany’s

according to market-research firm IRI. Single-dose packets are pricier, ranging from around $3 for 16 ounces of detergent, to more than $6. Powdered detergent is generally less expensive than liquid alternatives.

As more Americans draw a line on how much they will spend for household mainstays, cracks are forming in P&G’s laundry-soap superiority. P&G’s share of the $11 billion U.S. market for liquid detergent in August was roughly 2 percentage points lower than a year ago, according to analysts, company executives and data from research firm Nielsen.

, maker of lower-cost Arm & Hammer products including laundry detergent, said they have seen sales take off.

“The trade down to value detergent has begun,” Church & Dwight Chief Executive

said on a July earnings call with analysts. The company’s growth is aided by good timing: It recently brought manufacturing of its laundry pods in house, giving it more control to increase capacity to serve demand. It also recently launched a detergent designed for babies’ clothes and gear.

Mr. Farrell said that, industrywide, in the quarter ended June 30, dollar sales of liquid laundry detergent grew 7% overall. Sales were up 11% for value brands and 4% for premium offerings, he said.

P&G, the world’s biggest consumer-products company by sales, has managed to notch gains while increasing prices, in part because few corners of the economy have held up amid inflation as solidly as household staples. Shoppers are paying more for fewer goods. They have given priority to food and need-based home staples over clothing and gadgets.

P&G executives say they believe Americans will keep spending on household products, even if inflation and the overall economy worsen. The company, which makes everything from Gillette razors to Pampers diapers, is far better prepared for a downturn than it was before the Great Recession, they say.

In advertisements, the company is promoting the cost-saving benefits of its products, such as a detergent that cleans items in cold-water cycles, which could help households save on energy bills. It offers lower-cost alternatives in its Gain and Era brands and in Tide Simply, a lower-cost version of Tide that comes in a bright yellow bottle.

Have you recently changed the brand or type of laundry products you buy? Why or why not? Join the conversation below.

P&G said it is also making more products available in smaller package sizes, aimed at people who can’t or don’t want to spend as much at once. Smaller packages generally are pricier per unit.

Tide, in some ways, benefits from its high price tag because people might be hesitant to trade down to cheaper brands amid concerns of a big decline in quality, said Truist analyst

He predicts that Tide would only suffer serious sales losses in a long and deep recession.

Another bright spot for P&G: Even as some consumers seek out cheaper detergents, another segment of consumers is switching to its pricey detergent pods, the company says.

“There is a very strong labor market; consumer balance sheets are very healthy,” Mr. Moeller, the CEO, said. “What happens tomorrow? Who knows.”

Write to Sharon Terlep at sharon.terlep@wsj.com