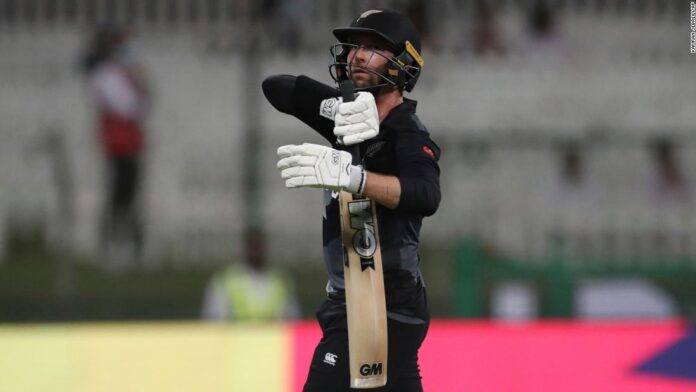 An x-ray confirmed Conway had broken a fifth metacarpal in his right hand after hitting his bat out of frustration following his dismissal in his team’s semifinal win against England on Wednesday.

“He’s absolutely gutted to be ruled out like this at this time,” New Zealand head coach Gary Stead said in a statement.

“Devon is hugely passionate about playing for the BLACKCAPS and no one is more disappointed at the moment than he is — so we’re really trying to rally around him.

“It looked a pretty innocuous reactionary incident on the field, but the blow obviously caught the bat between the glove padding and while it’s not the smartest thing he’s done, there’s certainly an element of bad luck in the injury.”

Conway scored a crucial 46 runs as New Zealand successfully chased down England’s tally of 167 in the semifinal.

The moment of frustration came after he was stumped by Liam Livingstone with his side needing 72 runs from 38 balls.

His absence will give Stead an unfortunate selection headache ahead of Sunday’s showdown with fierce rival Australia, who beat Pakistan in the other semifinal on Thursday.

Conway will also miss his side’s Test series against India after the World Cup concludes.