Mandira treated Mouni and her family with some delicious treats.

Mouni Roy is inarguably one of the most popular actors in the Indian television industry. Her role in the popular show ‘Naagin’ made her a household name. Not just television, Mouni also made her debut in movies opposite Akshay Kumar in ‘Gold’. Besides all her work in movies and television, Mouni is known for her fashion statements, diet and fitness. While she loves to eat clean most of the times, Mouni is also a foodie at heart which can be seen in many of her Instagram stories. When it is time to indulge, Mouni isn’t the one to hold back!

In her recent Instagram stories, Mouni was seen enjoying a mid-week soiree with her family, hosted by her close friend and actor Mandira Bedi and her husband at their home. And it was indeed a delicious affair! Mouni took to her Instagram stories to share snippets from the evening. Take a look: 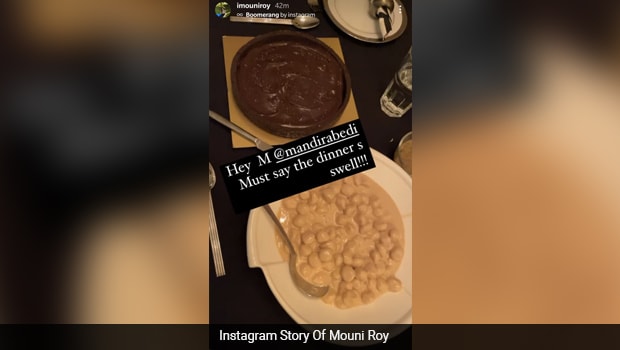 Seems like Mandira treated Mouni and her family with some delicious-looking pasta! “Hey M, Must say the dinner’s swell”, Mouni wrote over the picture. She also shared another picture of Mandira and her husband Raj Kaushal setting the table together. In the picture, we can see a stunning line-up of dishes including palak paneer, a curd-based dish and some more 2-3 delicacies.

“Thank you @mandirabedi & @rajkaushal for the lovely evening and the A-h-maaaazing food! Fams the happiest they met you both. You’re the best!” She wrote. 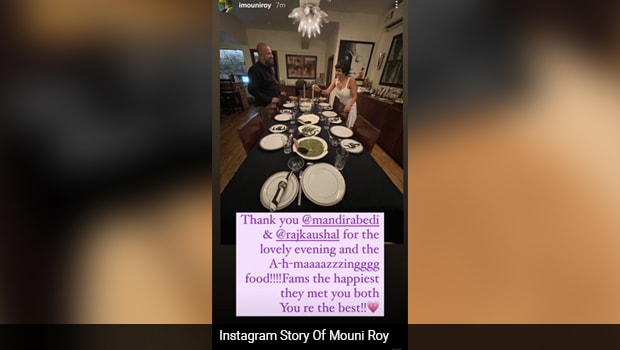 On the work front, Mouni will be next seen in Ayaan Mukerji’s ‘Brahmastra’ which is all set to release later this year, according to reports. It also stars Ranbir Kapoor and Alia Bhatt.