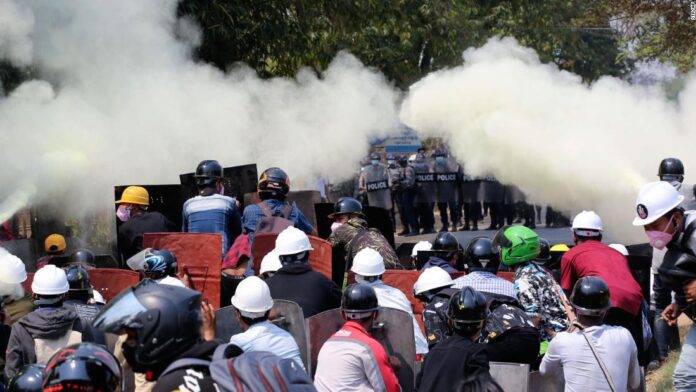 In many districts of the biggest city, Yangon, on Saturday and Sunday, witnesses reported sounds of gunfire and stun grenades. Terrified residents watched and filmed as security forces raided residential areas in the city and made several nighttime arrests. Residents told Reuters police fired shots and did not give reasons for the arrests, which continued into the early hours of Sunday.

“On the night of his arrest, Khin Maung Latt was tortured to death in his cell,” AAPP said in a news release Sunday. Reports of bruising to Khin Maung Latt’s head and body raised suspicions he had been abused, NLD lawmaker Ba Myo Thein told Reuters.

Khin Maung Latt had worked as a campaign manager for one of two Muslim lawmakers elected in 2020. Mourners gathered for his funeral on Sunday in Yangon.

Over the weekend, Myanmar troops were seen occupying hospitals and universities in Yangon and Mandalay, according to local media Myanmar Now. Activists fear their presence could hinder treatment for wounded protesters or enable arrests.

An official at the UN Office of the High Commissioner for Human Rights (OHCHR) said that at least five hospitals were being occupied Monday.

“We have received credible reports of hospitals being occupied in Myanmar today, including at least four hospitals in parts of Yangon and at least one other in Mandalay,” said James Rodehaver, chief of OHCHR’s Myanmar team.

“Such activity is completely unacceptable. Hospitals are locations under the protection of international humanitarian law.”

On Monday, international group Physicians for Human Rights condemned the “invasion and occupation of public hospitals and wanton excessive force against civilians.”

“If it was not obvious before, it is absolutely clear now: the Myanmar military will not stop violating the rights of the people of Myanmar until the international community acts decisively to prevent and account for these outrageous acts,” the group said in a statement.

Physicians for Human Rights said the military’s occupation of hospitals was “a violation of international law — which only serves to further undermine a health care system already embattled by the Covid-19 pandemic and by the military’s recent coup d’état.”

“This widespread siege of hospitals follows several days of prominent civilian injuries and casualties, and can be interpreted as a direct attempt to impede access to care for civilians,” said a statement from Sandra Mon, of the Center for Public Health and Human Rights at Johns Hopkins Bloomberg School of Public Health.

“It is also a threat to attending medics to warn them against further treating injured protestors. The Myanmar military has impunity despite their intentional acts of nighttime terror. We may be seeing a nationwide upsurge in military retaliation against peaceful protestors and medics in the days to come.”

Since the coup, security forces have repeatedly targeted medical workers, many of whom were the first to lead the civil disobedience movement. Last week, police and military personnel were filmed forcing three medical charity workers from their ambulance before brutally beating them with their guns and batons. And there have been cases where hospital staff have gone into hiding after the military demanded wounded protesters be transferred to a military hospital.

Myanmar’s police force said security forces are “maintaining” various universities and hospitals throughout the country “for the benefit of the people,” state-run newspaper Global New Light of Myanmar reported.

Myanmar labor unions called for a nationwide strike Monday, as part of a civil disobedience campaign against the coup. Eighteen unions of major industries including agriculture, energy, mining, construction, food, and transportation have called for a “full-extended shutdown of Myanmar economy.”

“The labor organizations of Myanmar stand united in support of an extended nationwide work stoppage against the military coup and for the future of Myanmar democracy,” a joint statement read. “No one can force any Myanmar citizen to work; we are not slaves to the military junta now and we never shall be.”

Meanwhile, women’s groups have called for people to turn out Monday to mark International Women’s Day, and “fly” their Htamains (sarongs) as part of the anti-junta movement. Images showed women marching with their Htamains flying like flags behind them, or hung across streets in front of barricades.

As protests continued Monday, at least two people died in the northern city of Myitkyina after police opened fire on protesters, according to Reuters who cited witnesses. Several others were injured in the violence.

The call to strike follows massive protests Sunday that were violently suppressed by the military, according to Myanmar Now. The reports said security forces fired live and rubber bullets in cities around the country, including Mandalay and Nyaung-U — close to the ancient city and UNESCO World Heritage site of Bagan.

Myanmar military personnel were filmed beating a man on the streets of Mandalay, and in Nyaung-U, footage obtained by Reuters showed security forces in riot gear with shields marching down the streets firing live and rubber bullets as protesters took cover.

Images sourced from local media show the bullets in the hands of protesters that were used against them. Eyewitnesses told CNN that police were also holding small daggers, forcing protesters to disperse.

At least 1,790 people have been detained, arrested, charged or sentenced by the military junta since it seized power, according to watchdog group AAPP.

AAPP said the junta were “intentionally terrorizing residents with live ammunition in Yangon.”

“After brutal crackdowns on peaceful protests yesterday (Saturday) by the police and military, brutal acts continued into the night, raids into residential areas and homes, gunfire, and unlawful search and detentions,” AAPP said.

The deadly violence against protesters has drawn hundreds of thousands of people to join demonstrations and civil disobedience campaigns in towns and cities across the country. A handful of those have been police personnel, who have broken ranks to join the protesters.

Last week, an official in western Chin state — which borders India and Bangladesh — requested the detention and return of eight police personnel who sought refuge in the Indian state of Mizoram.

In the letter to his Indian state counterpart, the deputy commissioner in Myanmar’s Falam District said they should be handed back “in order to uphold friendly relations.” According to a letter obtained by CNN, of the eight officials, four are aged in their twenties.

Speaking at a news conference, Indian Ministry of External Affairs spokesman Anurag Srivastava said: “As of now, we are ascertaining the facts. We will revert once we have more details.”

Srivastava said India is keeping a close eye on the situation in Myanmar. “We are in talks with our partner countries on this. We have said earlier that the issue must be resolved peacefully” he said.

The program was restricted to non-combat areas such as English language training but was criticized by rights groups for engaging with the military despite documented abuses and conflict in ethnic states. Critics also cited the 2017 military offensive against Rohingya civilians in Rakhine state, which forced 740,000 people to flee to neighboring Bangladesh and prompted a genocide case at the International Court of Justice.

Payne said in a statement that Australia’s aid program will be re-directed to “the immediate humanitarian needs of the most vulnerable and poor including the Rohingyas and other ethnic minorities.”