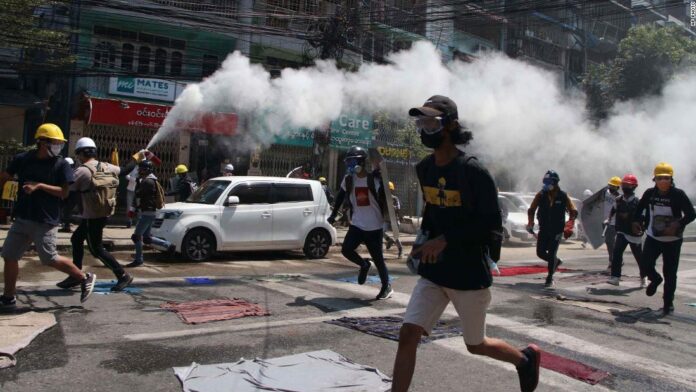 Military junta forces had cornered hundreds of people in Sanchaung township, in the country’s biggest city, and threatened to go door to door to hunt them down, Reuters reported. Police fired guns and used stun grenades as protesters sought shelter in nearby buildings.

Local media reported 27 people were arrested in Sanchaung Monday night. CNN could not independently confirm if any protesters were arrested.

The move sparked appeals from the US, UK and United Nations for police and military to allow about 200 barricaded protesters to leave the area. Thousands of people turned out in nearby streets and districts in solidarity and defiance of a nighttime curfew.

In the early hours of Tuesday morning, activists said the trapped protesters were able to leave the Sanchuang district after security forces left and a curfew lifted. Military trucks and security forces were seen leaving around 2 a.m. and protesters began exiting after 4 a.m. Volunteers were on standby to give the fleeing protesters free rides home.

Myanmar has been thrown into turmoil since the military seized power in a February 1 coup, detaining civilian leader Aung San Suu Kyi and forming a new junta to run the country. For more than a month, protesters across Myanmar have turned out daily in their thousands to resist military rule.

But security forces have responded with increasing violence and brutality. Witnesses have reported extrajudicial killings and nighttime raids, while footage and photographs show police and the military shooting dead anti-coup protesters and beating detainees. At least 54 people have died in crackdowns on protests, including many teenagers and young people, according to the UN.

In Sanchaung on Monday, protesters had turned out to celebrate International Women’s Day and “fly” their Htamains (sarongs) as part of the anti-junta movement.

Activist Maung Saungkha said there were cat and mouse exchanges throughout the day between police and protesters, who had run into buildings to hide as security forces tried to disperse them. Around 6 p.m., 200 young protesters realized police had barricaded them into a small area and refused to let them — or anyone else — leave, he said.

“Three streets had been blocked by police and soldiers. Even though the owners of the building were ordinary people who live in Sanchaung, even these people were not allowed to go out,” he said.

People were scared and heard security forces shout they would come building to building to arrest them, he said.

The building Maung Saungkha was hiding in had an emergency escape exit so he was able to leave the area. But many of his friends remained trapped until the early hours.

“I felt guilty all night,” said Maung Saungkha, from protest group General Strike Committee of Nationalities, which represents ethnic minorities. “I feel like I’m not only responsible for myself but also my colleagues.”

He believes security forces only backed off because of pressure from the UN and international embassies, which called for restraint and the release of protesters.

UN spokesperson Stephane Dujarric told reporters Monday that UN Secretary-General Antonio Guterres, “calls for maximum restraint and urges for the safe release of all without violence or arrests.”

The British Embassy in Myanmar tweeted it was aware of the “ongoing situation in Sanchaung” and urged “the security forces to allow all civilians to leave immediately without threat of violence or arrest.”

The standoff came as the military junta revoked the licenses of five independent media outlets that had been fearlessly reporting on the coup and subsequent protests.

Myanmar’s Ministry of Information announced on state-run television Monday evening that Mizzima, Democratic Voice of Burma (DVB), Khit Thit, Myanmar Now and 7Day News had been “stripped of their publication license and (were) not allowed to use any media for news purposes.”

DVB’s operations director in Yangon, Toe Zaw Latt, said the order meant they were no longer officially recognized as media organizations nor allowed to broadcast or publish on any platform.

“That’s not going to stop us,” Toe Zaw Latt said.

Mizzima also continued to broadcast images of the protests on its YouTube channel Tuesday. On Monday, the group confirmed on its website that the military revoked its license.

DVB was one of several media organizations forced to operate outside the country for years under military rule. Formed in 1992 by democracy activists, the organization ran its operations from Oslo, Norway, relying on a network of underground reporters in Myanmar and a bureau in Chiang Mai, Thailand, that provided a window into what was one of the world’s most-isolated nations.

When the military began opening up Myanmar in 2011 under the quasi-civilian rule of Thein Sein and embarked on a series of reforms, including abolishing pre-publication censorship, exiled media groups cautiously began returning to the country.

“From the beginning, our strategy was a ‘one foot in one foot out’ situation, as we never trusted military. And military never trusted independent media. We are an arranged marriage without love,” Toe Zaw Latt said.

“These five news outlets are a key part of Myanmar’s independent media landscape and provide vital information to the people of Myanmar. Independent reporting is all the more important in the current context, helping to counter the military’s misinformation campaigns and provide the public and activists with objective accounts of what is really going on in the wake of the coup,” he said.

When the military took control of the country last month, one of coup leader Gen. Min Aung Hlaing’s first acts was to pull the plug on independent TV channels. Since then, journalists have been among the 1,857 people detained by junta forces — among them two DVB reporters.

“There will clearly be more targeting of journalists on the ground and we expect more arrests. Our main concern is how can we manage our staff safety. At the same time, we need to report,” Toe Zaw Latt said.

Going back into exile could be a possibility, he said, but for now DVB will keep reporting on every platform they can. “The coup cant stop our (reporting) … there is no way we are going to stop right now,” he said.