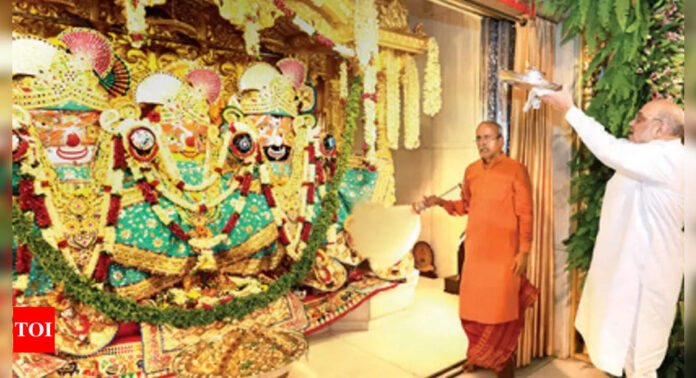 GANDHINAGAR: On a day when the annual rath yatra of Lord Jagannath was held with grandeur in Ahmedabad, Union home minister Amit Shah slammed the Congress, saying that its governments in Gujarat had clamped a ban on the annual procession thrice in the past and that the party was not capable of protecting the state’s citizens.
“Today, we are witnessing the 145th edition of the annual rath yatra (in Ahmedabad). During the Congress rule (prior to 1995), people used to live under fear thinking that something untoward would happen during rath yatra. Their fear was genuine because riots had happened during the rath yatra with miscreants even trying to snatch away the chariots on two occasions,” Shah said at Rupal village in Gandhinagar district on Friday while launching a number of development projects.
He said curfews during the rath yatra are a thing of the past as no one dares to play any mischief during the procession after BJP rode to power in Gujarat more than two decades ago. “When I was young, I had witnessed how Congress had put a ban on taking out the processions thrice, as if they are admitting that they are not capable enough to protect Lord Jagannath.” Earlier in the day, Shah performed ‘mangla aarti’ at Lord Jagannath temple in Ahmedabad before the commencement of the yatra.