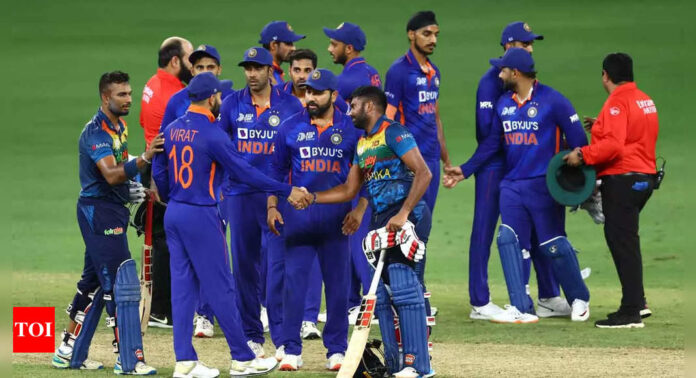 DUBAI: Rohit Sharma played down concerns about India’s form ahead of next month’s T20 World Cup after successive Asia Cup defeats, insisting the dressing room atmosphere remained “relaxed and chilled”.
India lost their second Asia Cup Super Four match to Sri Lanka with a ball remaining in Dubai on Tuesday to leave their dwindling final hopes at the mercy of other results.
“You don’t worry if you lose two matches,” Rohit, who smashed a 41-ball 72 in India’s 173-8, told reporters.

Rohit Sharma: Not fair to judge Bhuvneshwar Kumar after 2 matches

“We don’t talk like this in the dressing room, because we have played so many matches after the (last) World Cup and won. I don’t think it’s a cause of worry.”

If fierce rivals Pakistan — who similarly overhauled India with a ball to spare on Sunday — beat Afghanistan on Wednesday, they will knock India out and go on to face Sri Lanka in Sunday’s final.
“There is no gadbad (Hindi for disarray),” said Rohit. “From the outside it looks gadbad but we have no such feeling. I know how the media reacts when you lose a match and there are questions raised, that is normal. You can look inside the dressing room that the boys are relaxed and chilled.”
Sri Lanka chased down their victory target of 174 after veteran seamer Bhuvneshwar Kumar leaked 14 runs in the 19th over, leaving seven needed off the final six balls.
Kumar had given away 19 runs in the 19th over in India’s defeat to Pakistan, who needed 26 off the final two overs, but Rohit defended his bowler.

“Experienced batsmen get out and bowlers leak runs as well, these things are normal and happen,” said Rohit.
“Bhuvi has been playing for so long, and has worked for us for so many years in the ‘death overs’ and won us games. So we should not judge him on two or three games.”
Up and coming left-arm quick bowler Arshdeep Singh delivered the final over in both matches and faced a torrent of social media abuse, largely because he is from the Sikh minority, after dropping Asif Ali on nought in the 18th over against Pakistan.
Ali went on to smash a match-winning 16 off eight balls, but Rohit insisted the 23-year-old had been unaffected.
“Honestly guys here guys don’t look too much into social media these days. Few losses here and there, one dropped catch, we don’t look too much into it,” said Rohit.

“Yes, he was himself disappointed because it was a catch that could have been taken but again if you saw his confidence when he came and bowled that last over… he is a confident lad.”
Rohit and India, who have a poor recent record in global tournaments, are under pressure to deliver at the T20 World Cup in Australia in October and November, having won it only once at the inaugural 2007 event.
They last lifted the 50-over World Cup in 2011 and the ICC Champions Trophy in 2013, though they did win the last Asian Cup in 2018, when it was played in 50-over format.
India failed to make the semi-finals of last year’s T20 World Cup in the United Arab Emirates and lost in the semi-finals at the 2019 50-over World Cup in England.

Where is Umran malik (150km speed) ? Why Deepak chahar (top quality swing bowler )wasn’t there ? Tell me if these… https://t.co/N3CL9cj8hs

“In tournaments like the World Cup, Asia Cup, here the challenge is you face different teams with different plans,” said Rohit.
“We have discussed this in the dressing room that we should be thinking ahead of the opposition and then we will get results,” he said.
“But we should not think about it too much. Yes, pressure is there, and our work is to make the boys realise how to deliver in pressure situations.”