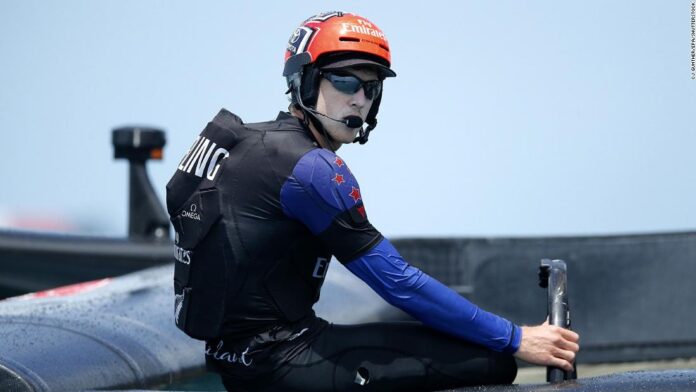 The state-of-the-art monohulls racing off Auckland this week are as far removed from the schooners which first competed for the silver trophy in the mid-19th century as a modern Formula One car is from a Model T Ford.

The 75 foot (22.86m) keel-less yachts rise out of the water on hydrofoils and glide across the surface to reach speeds in excess of 50 knots (93 kilometres per hour).

Challenger yacht Luna Rossa had maxed out at 53.4 knots (99 kph), skipper Sirena said on Tuesday, and Team New Zealand’s Te Rehutai is rumoured to be even faster.

Despite that raw speed, TNZ helmsman Burling said, the handling was similar to the much lighter 49er two-handed dinghy in which he won Olympic gold for New Zealand with Blair Tuke in 2016.

“They are very dynamic, they’re obviously very fast in straight line but they also give you a good ability to do a lot of maneuvers and to do those manoeuvres at a relatively low cost,” Burling told reporters on Tuesday.

“It’s more like a 49er … a small boat. I think the incredible thing about these AC75s is they’re a massive boat but just how dynamic they are to sail. The boat weighs over five tons but it feels really quick with how it moves. “I think it’s pretty incredible to see a boat of that size being thrown around like all the teams are doing now, and doing the speeds they are now.”

Having led Luna Rossa to victory in the challenger series, Sirena has had more experience in race conditions with the AC75 and believes the design has incredible potential.

“We’ve only raced this boat 16 times, which is nothing,” he said.

“We are still at the beginning of this class and I really hope whoever wins this race is going to continue with this class because I think these are the most exciting boats I have sailed on board in my life.”

Delayed by four days because of a COVID-19 lockdown in Auckland, the best-of-13 race match begins in the Hauraki Gulf on Wednesday.