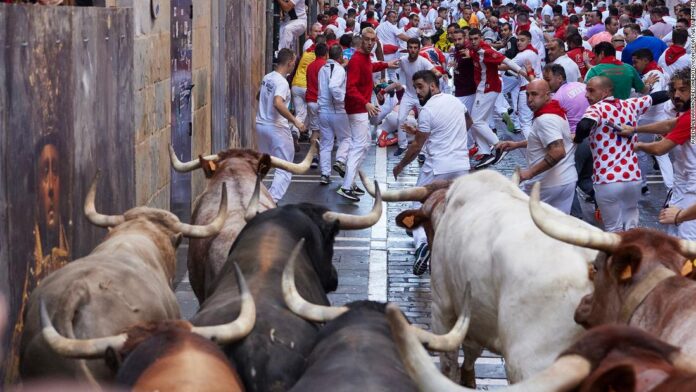 Madrid (CNN) — Half a dozen people, including a 30-year-old man from the US city of Atlanta, were taken to hospital after the first running of the bulls in three years kicked off in Spain’s Pamplona.

None of the six was gored by a bull during the run, the Navarra regional government press office told CNN on Thursday.

The American suffered a broken left arm, while the other five injured people, four men and a 16-year-old woman, all Spaniards, were sent to hospital with various trauma injuries, the press office said.

Revelers race during the running of the bulls at the San Fermin festival in Pamplona on July 7.

The first San Fermin festival since 2019 began on Wednesday, drawing huge crowds to the streets of the Spanish city.

Thousands gathered in front of Pamplona’s city hall to mark the opening of the nine-day celebration, which is popular with tourists. The annual festival was canceled in 2020 and 2021 due to the Covid-19 pandemic.

Thursday was the first day of the running of the bulls, a tradition dating back centuries and made world famous by Ernest Hemingway’s novel “The Sun Also Rises,” also published under the title “Fiesta”.

Thousands have taken to the for Pamplona’s iconic festival, which began on Wednesday.

The controversial event has long drawn criticism from animal rights activists, and dozens were seen protesting in Pamplona on Tuesday while wearing dinosaur costumes.

The bull running continues at 8 a.m. local time through July 14.