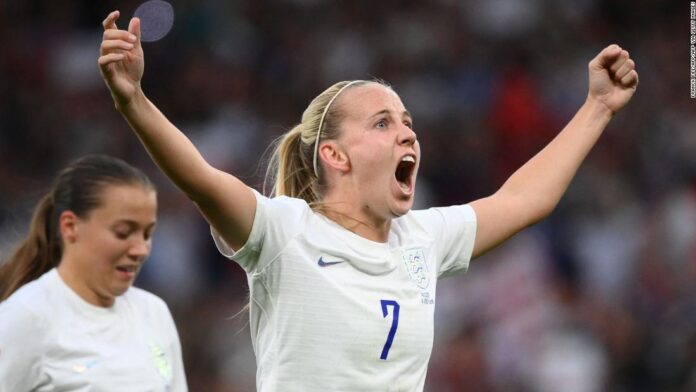 Beth Mead’s delicate lob after 15 minutes was all that separated the sides in a tense 1-0 England win at a raucous Old Trafford, as Sarina Wiegman’s side secured a hard-earned three points that will no doubt settle the early tournament nerves.

England certainly improved as the match went on and perhaps could have extended its margin of victory, but a lack of care and cohesion in the final third meant a number of good opportunities were squandered.

Austria provided enough of a threat to ensure the match was never comfortable and Wiegman will know how much her team will need to improve if it is to live up to the hype of pre-tournament favorite.

There was little celebration from England’s Dutch head coach when the final whistle blew, but her players remained on the pitch to take in the adulation of the home crowd on a historic night. In total, 68,871 fans came to Old Trafford to watch the game, setting a new attendance record for a match at the Women’s European Championships.

With the final on July 31 scheduled to take place at Wembley Stadium, it’s likely that record will be broken again. After Wednesday night’s performance, however, the most pertinent question is whether England will be one of the teams that make it there.

“The atmosphere speaks for itself,” Player of the Match Georgia Stanway told reporters after the match. “The occasion is massive and, obviously, there are going to be a bit of nerves.

“The noise [was the best thing about tonight], and although it was hard to hear information, the noise just shows where we’re at. That’s the standard the fans have set — bring the noise and we can rattle the opposition.”

Stanway’s admission that her teammates struggled to hear Wiegman’s debrief in the post-match huddle gives some indication of the level of noise inside Old Trafford on Wednesday, as the players broke away prematurely to join in with the singing.

“Next time, we need to delay ‘Sweet Caroline’ [after the final whistle],” she laughed.

Neil Diamond’s classic song became the theme tune to England’s men’s run to the Euro 2020 final last summer and the women’s team will also be hoping to hear it a few more times during this tournament.

Walking the four miles or so from Manchester’s Northern Quarter to Old Trafford on the outskirts, there was very little sign that in a matter of hours the city would be hosting the opening game of a major international competition.

Save for a handful of fans in England shirts, it’s unlikely anyone visiting would have known there was even a match at all.

Organizers at the 2019 World Cup in France were criticized for what some perceived to be a lack of promotion for the tournament, and for all the palpable excitement there had been in the build-up to Euro 2022, the same problems seem to still persist here.

Approaching Old Trafford, however, there was certainly no lack of enthusiasm from supporters, thousands of whom had congregated around the ground more than three hours before kick-off.

They were confident, too. “Four-nil England,” shouted one group, most of them wearing shirts bearing the name of Leah Williamson, the Lionesses’ new captain.

Their confidence is certainly not misplaced, as there is no doubting the world class talent England has all across the pitch. The only concern coming into this tournament was whether the players could cope with the weight of expectation of being favorite on home soil.

In the build-up to the game, a number of the players spoke about the confidence that playing in front of home support would give them, but there were some palpable nerves early on.

More than one errant pass gifted Austria possession in dangerous areas on the pitch, though a lack of end product meant England’s mistakes went unpunished.

It didn’t take long for England to find its feet, however, as forays forward from wide players Lauren Hemp and Mead raised the decibels inside Old Trafford.

This was England’s first period of sustained pressure and it was enough to break down Austria’s defense, as Fran Kirby’s lofted through ball found Mead, who coolly collected the ball on her chest and lobbed the ball over the onrushing Manuela Zinsberger.

There were slightly delayed celebrations inside the stadium as it initially looked as though Austria defender Carina Wenninger had managed to clear the ball off the line, but a check of the referee’s watch and a blow of her whistle sent the Theatre of Dreams into delirium.

Plenty of famous number sevens have graced the pitch at Old Trafford — David Beckham, Cristiano Ronaldo and Eric Cantona to name just three — and Mead’s finish was befitting of the biggest games to have been staged here.

The noise inside the stadium had been gradually rising since the end of the national anthems, but Mead’s goal ensured it was now truly deafening.

It wasn’t long before the first rendition of ‘Football’s Coming Home’ broke out in one small section of the stadium, though it failed to spread any further around the ground; perhaps fans were apprehensive of getting too ahead of themselves after the heartbreak of last year’s men’s final against Italy.

In the second half, Hemp began to show flashes of why she had come into Euro 2022 widely touted as one of the star players to watch and with considerable expectation on her shoulders.

The 21-year-old has been superb for club and country this season and her combination of speed, close control and an eye for goal have made her one of the most feared players at this tournament.

Hemp was giving Laura Wienroither on the right of Austria’s defense a torrid time, but an uncharacteristic lack of end product meant her twisting and turning came to nothing.

With just over 10 minutes remaining, Austria created its best chance of the game and England had goalkeeper Mary Earps to thank for keeping the scores level as she palmed away Barbara Dunst’s long-range effort.

That would be as good as it got for the visitor, which will no doubt be given a huge confidence boost after going toe-to-toe with this heavily favored England team.

If the Lionesses are to go on a deep run at this tournament, Wiegman knows the team will need more of the support that they received at Old Trafford.

“Incredible [noise]. It’s just unbelievable,” she said. “We know where we come from and playing here at Old Trafford, in front of 70,000 people, bringing that noise. We hope they do that at other matches, we know we have sold out stadiums.”

Wiegman recognizes the team has much room for improvement, but for now, she’s letting her players revel in a historic night.