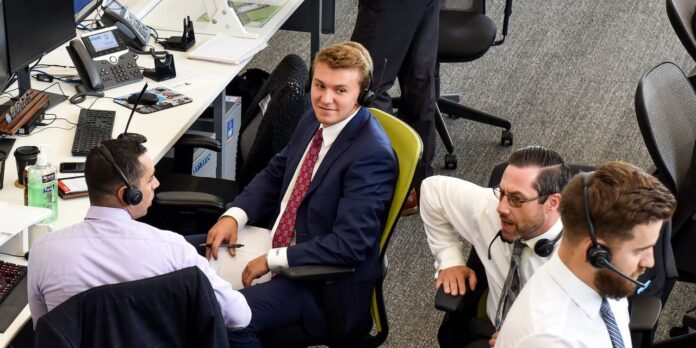 Last summer, a Michigan company decided all employees needed to return to their desks five days a week. A year later, the executive who made that call said he has no regrets.

“Not one second did I second-guess this decision. Not for one instance,” said

Holdings Corp. The company employs more than 7,000 people in Pontiac, Mich., a suburb of Detroit. “Without question, it’s been worth it.”

The decision—made before many other companies asked workers to return—came at a cost. Roughly 500 employees quit United Wholesale Mortgage over the policy, Mr. Ishbia said. Those who did typically departed for other jobs six to 12 months after the mandate. Some of those employees indicated in exit interviews they left UWM because they wanted to work more from home, he said.

United Wholesale Mortgage welcomed its employees back in July 2021 with everything from ice cream carts and goody bags to team gatherings. During the pandemic the company added two new buildings, additional massage rooms and shuffleboard courts to a sprawling campus that also includes an arcade room, sand volleyball courts and an on-site hair salon.

Every week, Mr. Ishbia said he sees reminders that in-person work is speeding up decision making and helping employees quickly resolve problems. A technical team working on a new lending product, for example, avoided weeks of unnecessary work, Mr. Ishbia said, by sitting near a product group. The team was able to overhear a problem that needed to be addressed and make an adjustment to plans.

David Yeh, an IT product manager who returned in June 2021, said getting re-acclimated to a five-day-a-week schedule took some time. He now spends time with co-workers at a company sports center. He also finds it more efficient to work on projects in the office since he can pop over to a colleague’s desk.

“It was fun working from home,” he said. “It’s so much easier, in my opinion, to work directly with the people on my team.”

Kristin Allen, an assistant vice president of sales who oversees about 60 people, said she can hear when calls go awry in the office, or look across the room and see an account executive who appears to be struggling. “Overall, this strengthens us as a team,” she said.

UWM has made some changes to address employees’ desire for at-home time, such as the choice of four 10-hour days in office rather than a typical five-day-a-week schedule. About 10% of workers have now opted for such schedules, Mr. Ishbia said. Managers also remain flexible when employees need to leave the office to attend to personal matters, he said.

When employees told him last year that they wanted to stay remote, the CEO said that was a fine choice—as long as they found another employer. “They can work from home, they just can’t work at our company from home. There’s no hard feelings,” he said. “It just means they weren’t a great fit.”

One who left was Joseph Danz, 27, who started at UWM in August of 2020 in the IT department and lives in Rochester, Mich. Mr. Danz said he enjoys working with others in person, but then several people he considered mentors left the company. He also got used to the convenience of being able to do tasks like laundry in the middle of the day when there was downtime. He resigned in April.

“I always said if they would increase flexibility it would be something I’d consider coming back to,” he said. “Who doesn’t want a little bit of flexibility?”

Archie Woods, 38, commuted into the office five days a week before the return policy went into effect so he could build relationships and be around company leaders. But he tired of the drive once roads got busier, and left UWM’s IT department last October.

“When I started spending like two and a half, three hours a day in the car, I started thinking about doing something else,” said Mr. Woods, who lives in Ann Arbor, Mich.

A mix of in-office and home work can be effective, said Peter Cappelli, professor of management at the University of Pennsylvania’s Wharton School of Business. “A lot of managers, and a lot of leaders, think that if they’re watching you, then you’re productive,” Mr. Cappelli said. “We know that’s not true.”

Has your company mandated a number of days employees must be in the office? If so, how many? Join the conversation below.

Over the past year, some senior managers have informed him that teams had lost good employees over the policy, Mr. Ishbia said. He said his response was that the company would find a competent replacement.

“If you want to work from home and just kind of exist, and you have no growth opportunity—you don’t want to build your career and get to this next level and just want to be average—there’s nothing wrong with that,” he said. “That’s what a lot of people are.”

When executives at competitors call Mr. Ishbia and say they are hesitant to push their own workers back to the office, Mr. Ishbia said he jokes in response: “I tell them, ‘Let them stay home,’” he said. “I’m kicking their ass and having fun with it.”

Write to Chip Cutter at chip.cutter@wsj.com