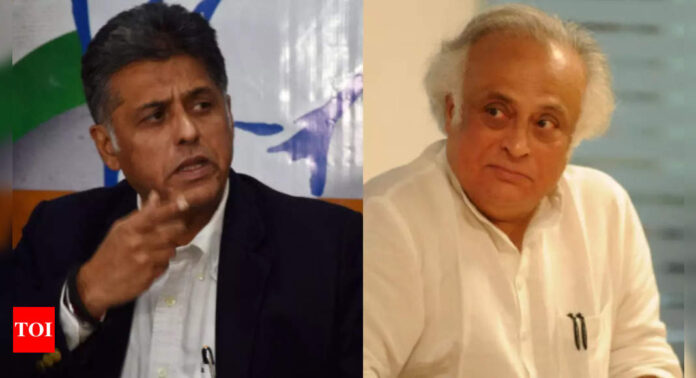 NEW DELHI: The Narendra Modi government’s new armed forces recruitment scheme Agnipath is driving a wedge in the unity of the principal opposition Congress party. Two senior leaders have crossed swords over the scheme whose announcement led to violence in some parts of the country earlier this month.
On Wednesday, Congress’s Lok Sabha MP from Sri Anandpur Sahib in Punjab Manish Tewari and party general secretary in-charge of communications Jairam Ramesh clashed over the Agnipath scheme.
Tewari wrote an article in a national English daily on Agnipath. He presented detailed research from across the world and argued why defence recruitment reform and modernisation were in the larger national interest.
Tewari, a former Union minister in the Manmohan Singh government, referred to the Kargil Review Committee (KRC) constituted in the wake of the 1999 Kargil war. He quoted one of the KRC’s recommendations which said, “The Army must be young and fit at all times. Therefore, instead of the present practice of having 17 years of colour service (as has been the policy since 1976), it would be advisable to reduce the colour service to a period of seven to 10 years and, thereafter, release these officers and men.”
He further said a Group of Ministers (GoM) endorsed the KRC’s recommendation in 2000. The GoM said, “In order to ensure that the armed forces are at their fighting best at all times, there is a need to ensure a younger profile of the services. However, this is a highly complex matter. While the Army desires a younger age profile, so do the central paramilitary forces (CPMFs).”
Tewari concluded by stating that the Agniveer recruitment reform must be studied in the context of the appointment of a chief of defence staff (CDS) and reorganisation of the armed forces in order to promote jointness and synergy.
However, Ramesh, a Rajya Sabha MP from Karnataka, who was appointed as Congress general secretary in-charge of communications on June 16, took exception to Tewari’s article supporting the Agnipath scheme.
In a tweet, Ramesh said, “Manish Tewari, INC (Indian National Congress) MP, has written an article on Agnipath. While @INCIndia is the only democratic party, it must be said his views are entirely his own and not of the party, which firmly believes Agnipath is anti-national security and anti-youth, bulldozed through without discussion.”

Manish Tewari, INC MP, has written an article on Agnipath. While @INCIndia is the only democratic party, it must be… https://t.co/cugiwKqipf

Tewari retorted to Ramesh to point out that the views presented in the article were personal. Tagging his party colleague, he said, “The tagline of the article does say – The views are personal. I wish @Jairam_Ramesh ji would have read it right till the very end.”

The tag line of the article does say – The views are personal. I wish @Jairam_Ramesh ji would have read it right ti… https://t.co/f7p4rwJs3G

This is the first time after his appointment to the crucial post that Ramesh, also a former Union minister, has had to face a retort from a party colleague.