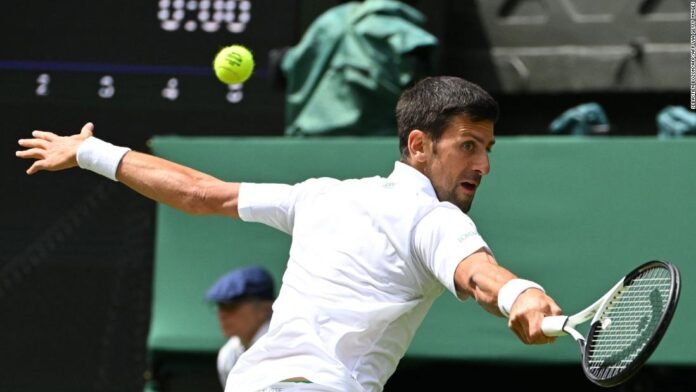 The Serb, aiming for a fourth straight Wimbledon crown, barely had to break a sweat on Centre Court as he dominated his Australian opponent throughout, further cementing his position as favorite for the men’s singles title this year.

The victory made it 23 wins in a row at Wimbledon for Djokovic — a run that stretches back to the 2017 quarterfinals — as well as his 81st at the tournament.

Having been tested in his opening match against world No. 81 Kwon Soon-hoo, this match was more of a parade for the defending champion as Kokkinakis, 26, simply couldn’t find a way past Djokovic.

The top seed will next face fellow Serb Miomir Kecmanović.

“I’m very happy with my performance. I started very well, solid from the back of the court, made him work for every point and worked him around the court,” Djokovic said in his post-match interview on court.

“I am pleased with the way I’ve raised the level of tennis in the past two days. Obviously, just thinking about the next challenge and hope things will get better as the tournament goes on.”

After a year that brought plenty of uncertainty for the Serb, he said he was enjoying playing at the biggest events.

“You don’t think about numbers when you start playing tennis,” he said. “99% of children when they grab a racket have dreams and passion for the sport.

“When you get down on yourself, you are going back to that inner child and remembering why you start to play the sport, and anything you achieve is a bonus.”

There have been some impressive performances on Centre Court so far this tournament but not many better than that of France’s Harmony Tan, who knocked out Serena Williams on Tuesday.

Since her memorable victory, however, Tan has been slammed by her playing partner Tamara Korpatsch for dropping out of their doubles’ match.

“She just texted me this morning. Let me wait here [until] one hour before the match start. I’m very sad, disappointed and also very angry that I can’t play my first doubles Grand Slam.

“It’s really not fair for me, I didn’t deserve that. She asked me before the tournament if we wanna play doubles and I said yes. I didn’t ask her, she asked me!

“If you’re broken after a 3h [three-hour] match the day before, you can’t play professional. That’s my opinion.”