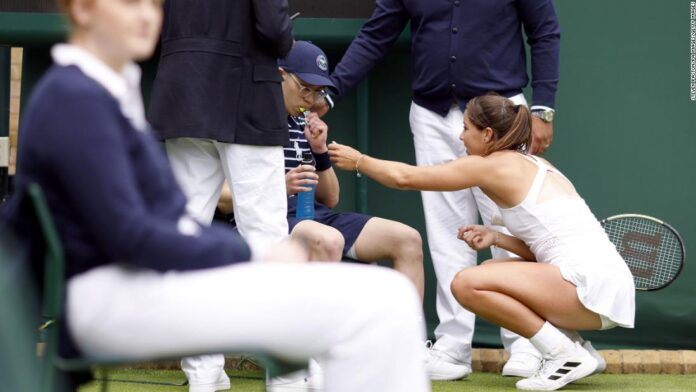 At the start of the second set of Burrage’s match with Lesia Tsurenko, one of the ball boys for the game on Court No. 18 appeared to be struggling with an illness.

“He just said he was feeling really faint. He couldn’t actually really talk. It was quite distressing to see,” Burrage told reporters afterwards.

While the youngster took a seat on the court and was looked after by the match umpire, the British No. 5 rushed to the fridge to bring him some water and one of her energy gels.

The 23-year-old was even offered a packet of Percy Pigs — a brand of British gummy candies — from the crowd to give to the ball boy while he sat.

“Just tried to get him some sugar, gave him a Gatorade and a gel. The gel is not the nicest thing, so they managed to find some Percy Pigs sweets somewhere along the line in the crowd, which he got down and then started to feel better.”

Burrage spent several minutes with the youngster while he sat before medical assistance came and helped to escort him off the court.

“He was not in a good spot and I just tried to help as much as possible,” she said. “I actually had a panic attack once in juniors here, so I’ve been where he is. I kind of know a little bit how he was feeling.”