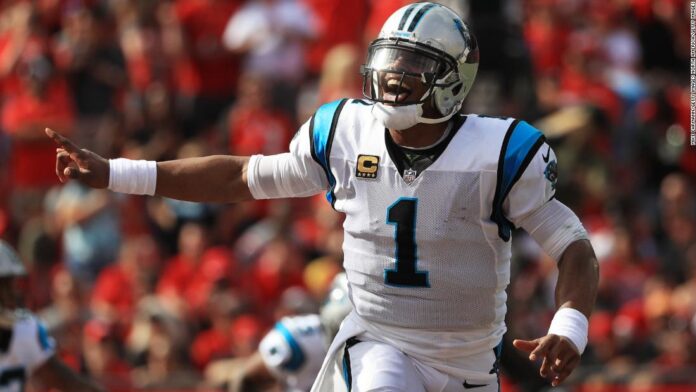 The quarterback — famed for his touchdown celebration where he mimics Clark Kent ripping off his shirt to reveal the Superman logo underneath — re-signed with the team where he spent nine years after agreeing to terms on Thursday.
Newton, a former No. 1 overall pick by the Panthers in 2011, left in 2019. He spent last season at the New England Patriots, starting 15 games before being released in training camp after Mac Jones became the chosen starter.

The 32-year-old has been out of work ever since but received the call from his old team after news broke that Panthers starting quarterback Sam Darnold had suffered an incomplete fracture in his right scapula and would miss multiple weeks of action.

With a 4-5 record this season, the Panthers are still in with a shot of reaching the playoffs and after Darnold’s struggles over the last five weeks, a quarterback change just might be the thing to reinvigorate the squad.

The team faces the Arizona Cardinals this Sunday, and while the plan is to play P.J. Walker at quarterback, head coach Matt Rhule did not rule out Newton featuring.

“We just got to get him here. Get him out, get them physical,” he told the media. “Start teaching him what we do. And at the end of day, I talked to Cam and he told me he feels he’s healthy and feels great. This is healthy. He’s been so healthy. A healthy Cam Newton is a special player. So we’ll just take it day by day.”

In Week 11, Newton could be reunited with his former Panthers coach Ron Rivera as they host the Washington Football Team.

Return of the king

Newton and the Panthers had a great deal of success during his time in Charlotte.

Through his combination of a big arm and explosive physical traits, Newton was a dominant force in the league for several years, with defenses struggling to stop his dual-threat skills.

He helped the team reach the playoffs four times in his nine years there, reaching Super Bowl 50 in 2015.

Although the Super Bowl ended in a heartbreaking defeat to the Denver Broncos, it was comfortably Newton’s best season in the league, with him being voted the NFL’s Most Valuable Player and Offensive Player of the Year.

His return to Carolina didn’t go unnoticed by NBA superstar LeBron James, who tweeted: “EXTREMELY HAPPY for Cam!! Back where it all started! Shine brother shine!!”

For D.J. Moore, who was drafted by the Panthers in 2018, he believes Newton’s return can have a positive impact on the team.

“I just know that his vibe and his energy is going to hit everybody differently,” the wide receiver told the media.

“Once everybody gets to understand him, know what he’s about, it’s going to change everybody’s perspective. From the outside, he might look like he’s playing around, but that’s how he works.”