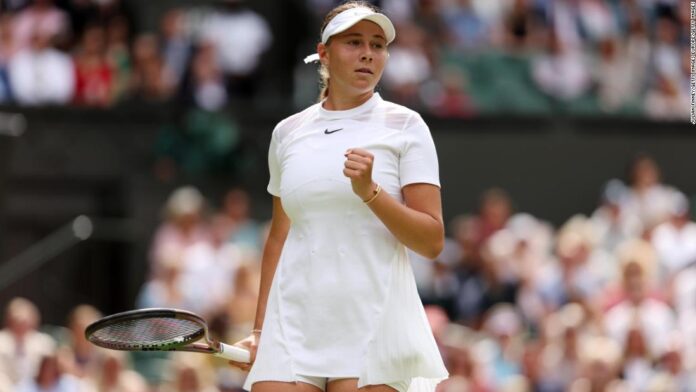 The two Americans met in a high-quality affair on Centre Court but it was Anisimova who performed best, winning 6-7 (4-7) 6-2 6-1.

“This is the most special day of my career,” Anisimova said after her win. “It’s just a huge privilege to play on this court playing Coco.

“Winning is so special, especially in front of a full crowd — you guys were amazing.”

Gauff, 18, had started better of the two and raced into the lead in the first set before Anisimova began to settle in — it was the first time she had played a match on the main court at Wimbledon.

By the end of the set, the pair had to be separated by a tiebreak which Gauff managed to get the better of before momentum quickly swung the other way.

Gauff’s first serve started to let her down in the second set and it gave her opponent all the opportunity she needed to force a deciding set.

Anisimova, ranked 25th in the world, didn’t take her foot off the gas and continued to dominate from the baseline while cutting down on the unforced errors.

The 20-year-old only got better as the match went on and she was able to serve out the match with ease to progress into the next round where she will face Harmony Tan on Monday.

“There are so many American players doing well and I’m proud of my country and how we have been doing,” Anisimova added.

“It was really exciting to have an all-American clash on this court so it was really special.”