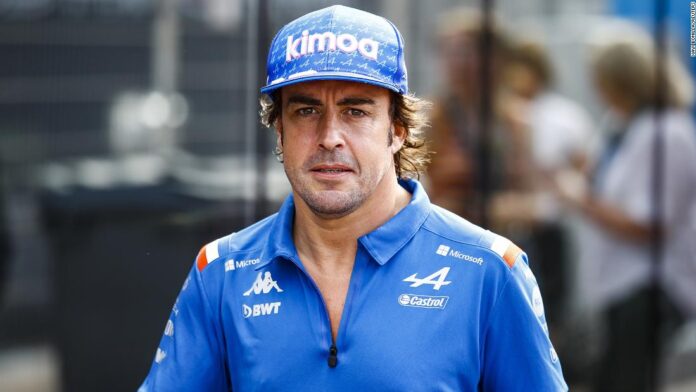 Back on the circuit and preparing for this year’s British GP, which takes place Sunday, is former F1 world champion Fernando Alonso, but questions about racing have had to take a back seat.

Asked by CNN Sport’s Amanda Davies how damaging Pique’s comments are for the sport, two-time world champion Alonso said: “It is damaging and there is no place in the sport for those comments.”

Meanwhile, Hamilton, who has the most race wins in F1 history, said the “time has come for action” on racism and responded to Piquet’s comments in a series of posts on Twitter, writing: “Vamos focar em mudar a mentalidade” — Portuguese for “Let’s focus on changing the mindset.”

Piquet on Wednesday addressed his comments, which were made in November last year but only came to light when the interview was released on Monday.

He said: “What I said was ill-thought-out, and I make no defence for it, but I will clarify that the term used is one that has widely and historically been used colloquially in Brazilian Portuguese as a synonym for ‘guy’ or ‘person’ and was never intended to offend.

“I would never use the word I have been accused of in some translations. I strongly condemn any suggestion that the word was used by me with the aim of belittling a driver because of his skin color.”

Alonso told CNN Sport that he and his Alpine team “stand with Lewis,” adding that in recent years there had been a “big change” in his team to make it more inclusive.

“The sport should be an example for our society,” he said. “And this week has been very sad for our sport and let’s see what the actions will be after those comments.

“I think we will agree with whatever FIA or FOM will do, but I do believe that there is the need to have some action. If it’s just another episode, there is no action, I think is not enough. I think we need to move from these people and this is a perfect example.”

Piquet’s comments came in the same week that Red Bull Racing terminated the contract of junior driver Juri Vips after an investigation into his alleged use of a racist slur during a live gaming stream.

The 21-year-old Estonian was relieved of all team duties on June 21, and after the incident, Vips apologized and admitted the language used was “entirely unacceptable” in a post on his personal Instagram account.

Alonso told CNN that he had seen many positive changes in the sport during his 21 years in the paddock.

“There are a lot of women now working in the team, a lot of talented designers and mechanics. And we have all kinds of people that we love to have them,” he said.

“We love to share the team with them. And this is a sport, as I said, [that] should be an example for our world.”

The 40-year-old is enjoying his F1 return, having stepped away from the sport in 2018.

“This year, I think we are a little more competitive, so that’s also boosting my confidence,” the Spaniard, who came back last year, said.

“It felt good,” he told CNN. “It was a very special moment because, after you come back to Formula One, it’s not that you need to prove things, but it is a lot of dedication and sacrifices that you do in order to come back and to be in shape for Formula One again at 40. And when you deliver a good result it’s somehow [a] relief and proof that you are working very hard to get those results.”

Like most athletes, Alonso hates losing, but he said his perspective had shifted during his second stint in the sport.

“With time, you realize in Formula One that you need to have the package to win. It’s not only that one day you have a strange inspiration and you are delivering something magic,” he said.

“In Formula One, magic doesn’t exist too much. You need the right car and the right day to perform, so I’m trying to build with Alpine that package and that car that is capable of winning, but I’m enjoying the process of doing that. It’s not a frustration, why you are not winning.

“I miss winning. Yeah, for sure. But luckily, I had this time off in Formula One that I tried different categories with endurance, with the Le Mans 24 hour, Indy Car, Dakar, Daytona, all those categories brought me the victory feeling again and I was on top of the podium and that was enough, I think, to reset these winning needs.”

“And now, I can spend [a] few more years just trying to win Formula One,” he added.