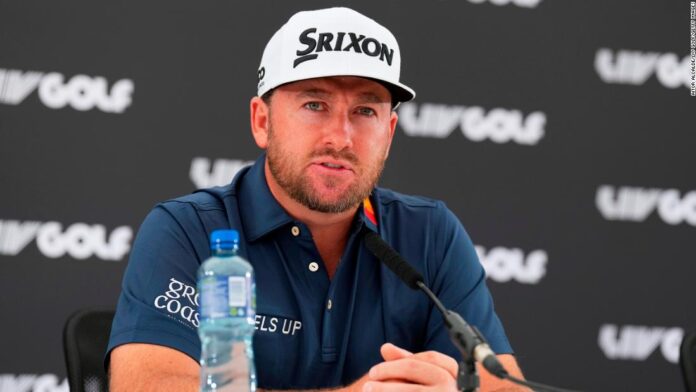 Golfers have been criticized heavily for joining the breakaway tour, which is backed by Saudi Arabia’s Public Investment Fund (PIF) — a sovereign wealth fund chaired by Mohammed bin Salman, the Crown Prince of Saudi Arabia — for the “money-grabbing” nature of the exodus from golf’s traditional tours and for accepting money from a country with a dismal human rights record.

Bin Salman was named in a US intelligence report as responsible for approving the operation that led to the 2018 murder of journalist Jamal Khashoggi, though he has denied involvement. Human rights groups have also criticized the country for conducting mass executions and for its treatment of gay people.

Before the LIV Golf series’ inaugural event in June, when questioned about accepting money from the Saudi Arabia regime, McDowell said the tour was “incredibly polarizing.”

“I think we all agree up here, take the Khashoggi situation; we all agree that’s reprehensible. Nobody is going to argue that fact,” he said in a press conference.

“But we are golfers. Speaking personally, I really feel like golf is a force of good in the world. I just try to be a great role model to kids. I know what the game of golf has taught me. I love using the game of golf as something to kind of help grow around the world. That’s pretty much what we’ve been for the last 20 years, being role models for kids and try to use this game, like I say, as a force of good really.

“We are not politicians. I know you guys hate that expression, but we are really not, unfortunately. We are professional golfers. If Saudi Arabia wanted to use the game of golf as a way for them to get to where they want to be and they have the resources to accelerate that experience, I think we are proud to help them on that journey using the game of golf and the abilities that we have to help grow the sport and take them to where they want to be.”

Since that first event in London, as more and more players choose to join for a bigger payday, the scrutiny has only increased.

Before its second event — and its first on US soil — outside Portland, Oregon, last week, players and organizers faced protests from 9/11 survivors and victims’ families who criticized golfers for working with Saudi Arabia, who they say was complicit in the 2001 terrorist attacks.

And for 2010 US Open winner McDowell, that attention and criticism has become quite the burden.

Speaking to the BBC ahead of the JP McManus Pro-Am at Adare Manor in Ireland, McDowell said he now doesn’t “wake up and feel proud of myself every day.”

“I can’t turn on my Instagram or Twitter account without someone telling me to go die,” the 42-year-old said on Monday. “I just wish I had said nothing. I wish I had sat there and shook my head and said, ‘No comment,’ but it’s not who I am.

“It’s really hard because I’m being asked questions that there are no right answers to. I’m having my moral integrity attacked all the time when all I’m trying to do is play golf.

“I’m trying to make a business decision for me and my family. I’ve paid my dues in this game over the last 20 years, I’ve tried to carry myself the right way.

“The tenuous links to what the Saudi regime have done… the horrible things they’ve done — (those who have criticized LIV Golf) are trying to link this to golf and playing professional golf.

“I’ve played golf all over the world, in countries whose human rights records could probably be torn apart as well.

“I’ve never questioned being in China, the Middle East, all over the world and what I do is I play professional golf. I play golf for money. I’ve chased that money all over the world all my career. Do I research into the morals of every dollar I’ve ever made? No, I don’t.”

Fronted by former world No. 1 Greg Norman, the team-based LIV series is backed by the PIF and has pledged to award $250 million in total prize money. Tournaments are held over 54 holes, rather than the PGA Tour’s 72 holes, and there are no players cut during tournament play.