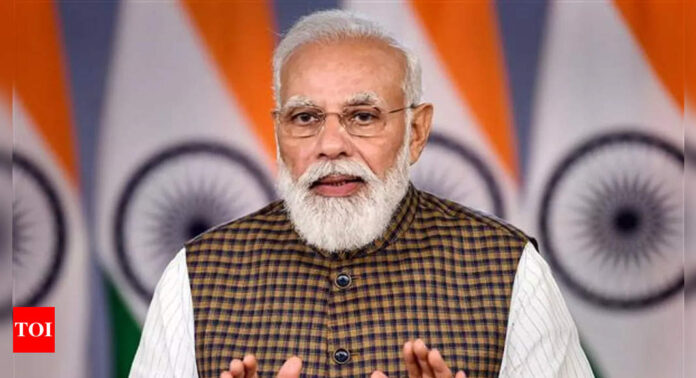 BHIMAVARAM: Calling Andhra Pradesh “the land of warriors”, PM Narendra Modi on Monday said besides revolutionary icons like Alluri Sitarama Raju, the state has also produced great patriots and freedom fighters, like Pingali Venkaiah, Kanneganti Hanumanthu, Kandukuri Veeresalingam and Vuyyalavada Narasimha Reddy.
He said the history of the country’s freedom struggle was not about a few years or some people, as he called for building a New India that reflected the dreams of the freedom fighters and one that ensured equal opportunities to all sections, news agency PTI reported.
“The fight for freedom is not the history of a few years, a few regions or some people. This is the history of every nook and corner of the country, the history of sacrifices and martyrdom of people of all corners,” Modi was quoted by PTI as saying.
Modi also emphasised the need to give greater opportunities to adivasis, adding that his government has extended the MSP for 90 forest products of the adivasis against 12 products given till 2014. He also felicitated the heirs of Alluri and his follower – 83-year-old Alluri Sreramaraju and Bodi Dora, the grandson of Mallu Dora, who was the righthand man of Alluri during his fight against the British.
Andhra Pradesh CM YS Jagan Mohan Reddy, who chaired the meeting, said his government has named a district after the revolutionary freedom fighter. “We will continue to work for the uplift of adivasis and complete the work Alluri had begun,” the CM said.
Governor Biswabhushan Harichandan, Union tourism and culture minister G Kishan Reddy, actor K Chiranjeevi, and other leaders were present.