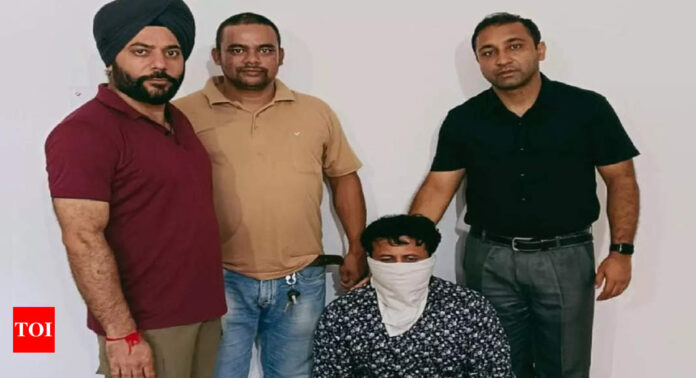 DEHRADUN: A former cook, bus conductor, auto-rickshaw driver, factory worker, and a current school teacher have emerged as key members of a team that pulled off one of the biggest scams to have rocked Uttarakhand, worth roughly over Rs 200 crore — the Uttarakhand Subordinate Services Selection Commission (UKSSSC) paper leak.
The spread of the corruption has led many to compare it with the ‘Vyapam’ incident in Madhya Pradesh of 2013, perhaps one of the biggest entrance test scandals to hit the country.
Authorities till Friday have arrested 32 people in the case, which saw the leaked papers being sold to over 200 candidates for Rs 10-15 lakh each. A copy of the paper was allegedly leaked by the owner and a staffer of a Lucknow-based tech-solutions private firm, which the government broke ties with after the matter came to light.
“Masterminds” of the scam have been identified as Hakam Singh, his close aide and UP-based cheating mafia member Kendrapal, Chandan Manral, Manoj Joshi, and Jagdish Goswami. Most of them reportedly built properties worth at least Rs 50 crore each with the ill-gotten wealth. They were allegedly in this business for the past 10 years.
Hakam, who is one of the main-accused, hails from the Uttarkashi district and was the 18th person arrested by the STF on August 14. He was earlier a member of the Uttarkashi zila panchayat and a leader of the ruling BJP before being expelled by the party after his arrest.
An STF officer privy to the investigation said Hakam was a cook of the former Uttarkashi district magistrate (DM) in 2002. During his stint, he became a “close-circle staffer” of the DM, who took him to Haridwar district, where he was later posted.
“He met some politicians and gradually entered politics while staying in Haridwar. Before becoming a member of the Uttarkashi zila panchayat, Hakam was the head of the Liwari village in Uttarkashi from 2008-2013. While living in the holy town, he met the UP-based cheating mafia and one of the arrested accused, Kendrapal, in 2011. With his help, he started leaking question papers of various competitive exams to candidates for hefty amounts, with which he built properties worth crores,” said the officer.
It was Hakam who rented a house in Dhampur, UP, where he allegedly brought UKSSSC candidates a day before the exam and helped them solve the leaked question paper for Rs 15 lakh each.
Like him, an alleged member of the UP-based cheating mafia, Kendrapal, wrote his own rags to riches story by leaking papers to candidates competing in various exams in Uttarakhand as well as UP. A resident of Dhampur, UP, he was the 24th person to be arrested by the STF from Bijnor on August 26.
According to an STF officer who did not wish to be named, it was Kendrapal who roped Hakam into the cheating mafia after being introduced to him in 2011 in Haridwar through a labour contractor.
Kendrapal started his journey as an auto-rickshaw driver in 1996. He then worked at a readymade garment shop in Dhampur and later started his own cloth supply business before allegedly joining the mafia in 2011.
The probe agency has dug out details about some of his properties so far, which include 3.3 acres of land and a luxurious mansion in Dhampur, along with a partnership in a resort with Hakam in Uttarkashi.
Kendrapal allegedly roped in another arrested accused, Chandan Manral, whom he met in 2012.
Manral, a resident of Ramnagar, Nainital district, was the 21st person to be arrested by the STF on August 20. Among all the aforementioned accused, he is said to be the one who built properties bigger than all. They were worth at least Rs 100 crore.
Manral started his journey as a bus conductor on the Betalghat-Ramnagar route about 30 years ago. He then bought his own bus by collecting money from his friends and relatives and started a transport agency in the Kumaon region, before adding 19 more buses in later years.
After allegedly joining the cheating mafia after meeting Kendrapal, his property multiplied, and he started a stone-crusher plant spread across an area of about 25 acres. He had rented about 30 multi-utility vehicles to various government departments through his transport agency.
Kendrapal allegedly roped in another person in 2019, arrested accused Jagdish Goswami, after meeting him at a temple in Uttarakhand.
A resident of Almora, Goswami was the 22nd person arrested in the case on August 21. He was working as a government school teacher in the Bageshwar district at the time of his arrest.
He is the son of one of Uttarakhand’s most famous folk singers, Gopal Babu Goswami, who worked in Bollywood movies such as Kareena Kapoor-starrer ‘Jab We Met’.
He is accused of gathering exam candidates from his area and taking them to the rented accomodation in Dhampur to help them solve leaked question papers.
Another accused in the case is Manoj Joshi, a resident of Almora district, who was allegedly among the six first arrested by the STF in the case on July 24. Joshi, a Prantiya Rakshak Dal (PRD) jawan, was a former staffer at the UKSSSC in Dehradun before being terminated in 2018 due to “departmental discrepancies”.
Joshi had earlier worked at a factory in Lucknow for 12 years before getting recruited in PRD and getting deployed at UKSSSC.
STF officers said that Joshi, with the leaked question papers availed from the arrested accused employees of the Lucknow-based tech-solutions private firm, helped five of his family members get government jobs.
Ajai Singh, SSP STF, who is heading the ongoing probe, confirmed the properties of the accused and said that the agency had already informed the Enforcement Directorate (ED) to probe.
“They sought the case details, which we have provided them. They will dig out more information. Meanwhile, we will also book the accused under the Gangsters Act and attach their properties built with the money earned by committing this crime,” he said.