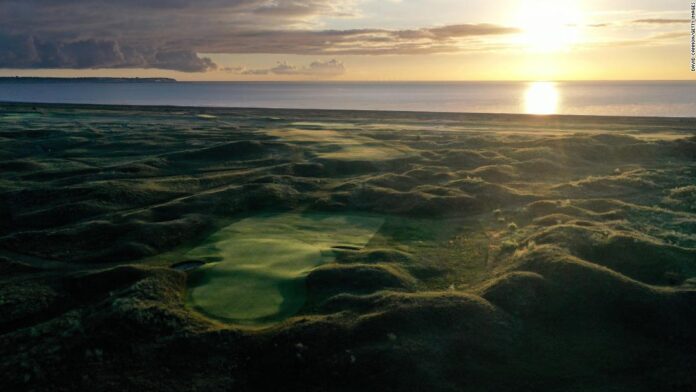 This isn’t a tale, however, about technological upgrades and a futuristic vision, instead Royal St George’s in Kent set out on a journey back to how it looked a century ago: a duneland paradise for flora and fauna.

With assistant greenkeeper Paul Larsen promoted to head in 2012, work with Natural England began in earnest in 2013 to improve the course’s ‘unfavorable’ Site of Special Scientific Interest (SSSI) rating.

But after consultation with Natural England’s Phil Williams and Dr. Graham Earl, invading species of grasses more commonly found on inland, parkland golf courses were burnt down and thinner, wispier fescue grasses have returned alongside wild orchids in their abundance.

“I think people are going to be surprised in a good way when they see it this time compared to 2011,” Larsen told CNN.

“The rank, thick grass was rubbish for golf, because you’d lose your ball and take 10 hours to get around, but also for wildlife. Birds like skylarks nest in the grass, and when you start making rank vegetation they can’t do that. What people forget is we’re a dunelands.”

Royal St George’s succeeded in its quest to achieve ‘favorable’ status largely thanks to Larsen’s drive.

“The mentality ‘it’s more work’ was not how he saw it and the course has flourished,” Williams told CNN.

“Paul often says he used to see it as a golf club with a sand dune on it, and now he sees it as a sand dune system with a golf course on it. Changing perceptions is what we need.”

The Sandwich Bay SSSI — which incorporates former Open host courses Prince’s and Royal Cinque Ports — is home to 90% of the UK’s lizard orchid population, one of Britain’s rarest plants, while otters and once extinct beavers have “surreptitiously returned” said Williams.

READ: The filmmaker looking to solve ‘the problem of feeling unwelcome’ in golf

Larsen himself is delighted by the about turn — from improvements in his own trade, to the working relationship with Natural England and to the flora and fauna explosion.

“Some trees had started to come down, and we found a little family of beavers that had claimed the land for themselves. A night vision camera was put in an old tree and we saw three beavering about, like they do,” he said.

“I’m a greenkeeper and I’ve learned so much about flowers and nature — I’ve changed. We’ve got wild plants like bedstraw, broomrape that we never had. And that’s because we’ve restored it to what it used to be.”

The 2021 Open Championship will be staged at Royal St George’s after the tournament last year was canceled due to the coronavirus pandemic. One difference players will notice from the past two Kent Opens (2003 and 2011) is the carries off the tees to the fairways.

“Now it’s all wild and you have to hit it 180 yards at least. Natural England are pleased about that because I’ve given land back to them. The birds can go in there and I’m not wasting time cutting short grass,” said Larsen.

“We weren’t always in sync with Natural England. If we wanted to build a new tee, they wouldn’t let us. But we worked together to get to where we are today.”

It wasn’t all easy however — Larsen said he risked the wrath of the old secretary when advised by Williams and Earl to burn back the invading grasses.

At Nairn Dunbar in Scotland — co-host of this June’s Amateur Championship — course manager Richard Johnstone told CNN a lightbulb went off in his head about a sustainable future as soon as he was promoted in 2016.

“Part of my interview was a proposal for the restoration of the links environment — the course had been over-watered and over-fertilized and was becoming more parkland.

“The rough was so dense we were getting lots of negative feedback about lost balls and slow play.”

READ: What a difference a year makes, with 2020 ‘the best of my career so far’ for Tyrrell Hatton

Johnstone also faced some opposition to change but after Nairn was crowned 2021 Environmental Golf Course of the Year it was a nice reward.

“In the industry a lot of people think it’s all about wildlife and ‘making bird feeders’. ‘But these awards are not about that. It goes right through the whole management process, going chemical free and so on.”

Johnstone said Nairn moved to a largely chemical-free program in 2016, in line with the banning of products to suppress worms and grubs and prevent turf disease.

Courses in Europe have, in places, gone even further than the UK — something Larsen saw first-hand when he worked in the Netherlands from 2007-2011 — but Johnstone said the use of chemicals is an issue that needs addressing.

“If you look in the chemical cabinets of some American courses, they’re the size of my whole facility. Probably 50 x 20 meters. My cabinet is 1 x 1 meter, two bottles.”

Larsen said his use of 30-50kgs of nitrogen a year is nothing compared to a football ground, who might put that amount on their penalty spot.

“Links courses can set the way and say: ‘This is how it is in a sustainable way, fewer fertilizers and fungicides.’

“We can do our bit over here and show that golf courses don’t have to be perfect. After all, is perfection what you want at the expense of nature?”

But while phasing out chemicals might take longer, Williams said greenkeepers worldwide could immediately make one very simple change.

“When they cut the greens from the tees and the fairways a problem you often see is the clippings are piled up out the way behind the green, which creates a massive area of nutrient enrichment. They could be dumped on a very important piece of vegetation.

“Take it away, compost it down and use it as a fertilizer on the greens, tees and fairways. That would be much better.”

Sweeping changes will irk some people, but companies with a sustainability ethos such as Ocean Tees set about tackling plastic waste on courses in a very simple manner.

After England’s oldest club Royal North Devon banned plastic tees from January 1 last year, Ocean Tees posted a pledge on Twitter to stop their use on golf courses, which was engaged with nearly 40,000 times on the day it was sent out.

“Outside the UK the pledge has mainly been made by English-speaking countries such as Canada and Australia,” founder Ed Sandison told CNN.

“And greenkeepers around the world too, who have a strong dislike of plastic tees. They end up on the golf course, in the local waterways or a bin — landfill is the best-case scenario.”

Pizá learned the ropes of golf course design in the 1990s very much under the mantra bigger is better, bunker here bunker there, no problem.

But when in 2003 he went to study a Masters in Edinburgh, on his first assignment Pizá started sketching and moving things around so a natural left-to-right hole could be converted to right-to-left.

“They tore my project to pieces on the board,” Pizá told CNN.

“They said: ‘We’re in Edinburgh where we don’t do that. What are you thinking?’ I quickly learned beautiful doesn’t mean alterations, it can mean sensitive, small details.

“To create good, sustainable golf you need the developer, the architect and the player to listen.”

Larsen — also a fan of natural-looking US courses like those at Bandon Dunes and 2015 US Open host layout Chambers Bay — is not only passionate about on-course TLC.

Alongside four others at esteemed UK links courses, including 2021 and 2025 Women’s British Open hosts Carnoustie and Royal Porthcawl, he set up The Links Club to help greenkeepers work together on environmental awareness.

“Setting up the club was a way to educate ourselves. We all help each other out and it’s the best thing I’ve ever done I reckon.

“We’re trying to get a lot of courses from Europe involved and I’m in contact with Americans to get them over. There’s no one that really does it like the links courses.”