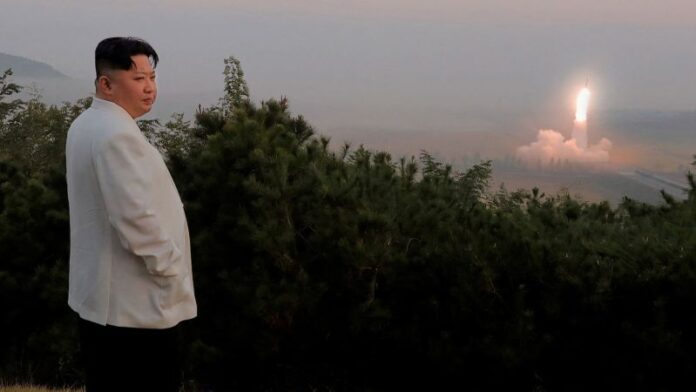 The “ultimate goal” behind North Korea’s nuclear program was to possess an “absolute force, unprecedented in the century,” Kim said Saturday as part of an order promoting dozens of military officials, the agency reported.

The order comes after what North Korea said was a “test firing of a new kind” of intercontinental ballistic missile (ICBM) on November 18.

The missile was a Hwaseong-17, according to KCNA, a huge rocket that is theoretically capable of delivering a nuclear warhead to the United States mainland.

Kim commended the officials who developed the new missile in his comments.

He called the missile “the world’s strongest strategic weapon” and said it represented “a wonderful leap forward in the development of the technology of mounting nuclear warheads on ballistic missiles.”

With the development of the new ICBM, Kim said North Korea had demonstrated to the world “the confident, ever-victorious future of our state advancing toward the goal of building the world’s strongest army.”

In a letter sent to Kim recently, scientists from North Korea’s Academy of Defense Science said the test firing marked a “great historic victory” for the country and demonstrated North Korea’s sovereignty.

Kim himself attended the launch with a child believed to be his daughter, Ju Ae.

Pyongyang also released a video of the missile launch, only the third time it has done so since 2017, according to Ankit Panda, senior fellow in the nuclear policy program at the Carnegie Endowment for International Peace.

While the test did show Pyongyang can launch a large ICBM and keep it aloft for more than an hour, North Korea still hasn’t demonstrated the ability to place a warhead atop a long-range ballistic missile – projectiles that are fired into space – that is able to survive the fiery reentry into Earth’s atmosphere.

But analysts say that with repeated tests, the North Koreans are refining their capabilities.