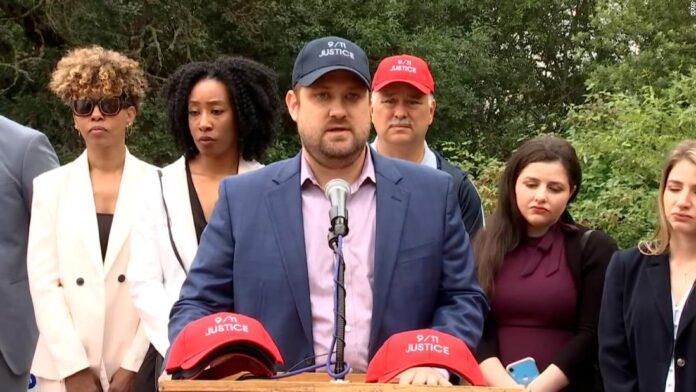 “Saudi Arabia is trying to sports-wash their reputation,” Sean Passananti, whose father died in the attacks, said in a press conference at the protest at Pumpkin Ridge Golf Club outside Portland, Oregon. “Instead of admitting their support and funding of al Qaeda, they are trying through the honorable game of golf to buy legitimacy.”

The allegations of Saudi government complicity with the attacks on September 11, 2001, have long been the subject of dispute in Washington. Fifteen of the 19 al Qaeda terrorists who hijacked four planes were Saudi nationals, but the Saudi government has denied any involvement in the attacks. The 9/11 Commission established by Congress said in 2004 that it had found “no evidence that the Saudi government as an institution or senior Saudi officials individually funded” al Qaeda.

Still, the victims’ families have pushed for further disclosures, and last year the FBI released a document that details the FBI’s work to investigate the alleged logistical support that a Saudi consular official and a suspected Saudi intelligence agent in Los Angeles provided to at least two hijackers.

The 9/11 issue is just one of a number of criticisms of the LIV Golf series.

Fronted by former world No. 1 Greg Norman, the team-based LIV series is backed by Saudi Arabia’s Public Investment Fund (PIF) — a sovereign wealth fund chaired by Mohammed bin Salman, the Crown Prince of Saudi Arabia — and has pledged to award $250 million in total prize money. Tournaments are held over 54 holes, rather than the PGA Tour’s 72 holes, and there are no players cut during tournament play.

The huge sums of money up for grabs and less demanding requirements spurred a number of golfers — many in the twilight of their careers — to break away from the PGA Tour and join LIV, including six-time major winner Phil Mickelson, four-time major champion Brooks Koepka and former world No. 1 Dustin Johnson.

LIV is expected to hold six further events across the world in the coming months, including at Trump National Golf Club in Bedminster, New Jersey, as well as in Boston, Chicago and Miami.

A coalition of families and survivors of 9/11 on June 10 sent an open letter to several players competing in the LIV Golf series, calling on them to reconsider their participation.

Brett Eagleson, whose father died on 9/11, said at Thursday’s news conference he plans to be at Bedminster next month to protest.

“One important message to these LIV golfers and the Kingdom is that we’re not going anywhere. Every tournament you’re going to have to deal with us in bigger numbers, more stories, from the families,” Eagleson said. “We’re going to be in your face for every tournament that is on US soil.”

A spokesperson for LIV Golf said in a statement, “We have tremendous respect and sympathy for the families of anyone whose loved one was killed on September 11, 2001. Al Qaeda’s attack on the United States was a national tragedy. We continue to believe that sports, including golf, are an important way to bring change to the world. … Golf is a force for good that entertains and teaches the values of fair play, competition, and excellence through hard work.”

Why the Saudi-backed LIV is controversial

Saudi Arabia is one of a number of countries that have used the appeal of sports to try to whitewash other political concerns, a practice sometimes referred to as “sportswashing.”

Golfers have faced sharp criticisms for choosing to accept the country’s money given its dismal human rights record.

Bin Salman was named in a US intelligence report as responsible for approving the operation that led to the 2018 murder of journalist Jamal Khashoggi, though he has denied involvement. Human rights groups have also criticized the country for conducting mass executions and for its treatment of gay people.
Mickelson tried to reckon with these issues in a controversial 2021 interview with author Alan Shipnuck for his book “Phil: The Rip-Roaring (and Unauthorized!) Biography of Golf’s Most Colorful Superstar.”

Shipnuck quoted Mickelson as saying disparaging things about Saudi Arabia’s human rights record and asserting that the kingdom killed Khashoggi. Yet Mickelson also admitted that he would consider joining the league anyway because it gave golfers “leverage” to change how the PGA Tour operates.

He later apologized, saying his comments were “reckless.”
US political figures have faced altogether similar criticisms for working with Saudi Arabia. President Joe Biden once pledged to make the country a “pariah” for its murder of Khashoggi, but earlier this month the White House said he plans to meet with Saudi officials, including bin Salman, in July.
Despite the criticisms, LIV held its first tournament in London earlier this month. South African Charl Schwartzel won the inaugural individual stroke-play competition, while Mickelson finished in 34th place.

Earlier this month, PGA Tour commissioner Jay Monahan announced that all golfers playing in the breakaway series will no longer be eligible to participate in PGA Tour tournaments.

“It’s troubling that the Tour, an organization dedicated to creating opportunities for golfers to play the game, is the entity blocking golfers from playing,” the organization said. “This certainly is not the last word on this topic. The era of free agency is beginning as we are proud to have a full field of players joining us in London, and beyond.”

Monahan also acknowledged last week that LIV represents a serious threat to the success of the PGA Tour.

“If this is an arms race and if the only weapons here are dollar bills, the PGA Tour can’t compete,” he said. “The PGA Tour, an American institution, can’t compete with a foreign monarchy that is spending billions of dollars in an attempt to buy the game of golf.

“We welcome good, healthy competition. The LIV Saudi Golf League is not that. It’s an irrational threat; one not concerned with the return on investment or true growth of the game.”

CNN’s Wayne Sterling and Evan Perez contributed to this report.

Rishi Sunak has had a torrid first 100 days as Britain’s leader. But the Conservatives might not be doomed | CNN