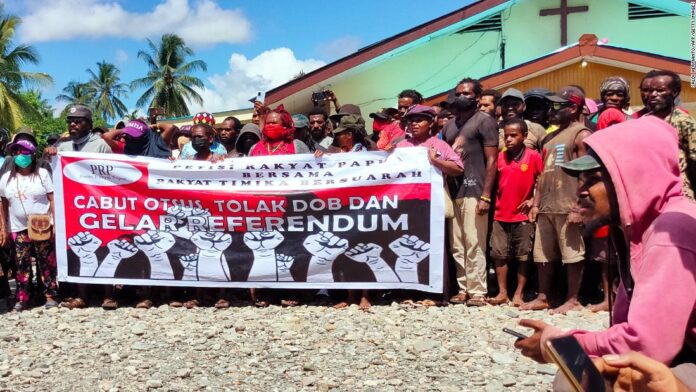 The Southeast Asian nation’s easternmost region, currently split between Papua and West Papua, will now be divided into five provinces, with the addition of South Papua, Central Papua and Highland Papua.

The government claims the decision will help spur development, improve public service delivery, and create more opportunities for Papuans to become civil servants in the resource-rich area that remains one of the country’s poorest regions.

Tito Karnavian, Indonesia’s Home Affairs Minister, said after the vote that the primary goal of the legislation was “to accelerate development in Papua to increase the welfare of the people in Papua, especially indigenous Papuans.”

But the plan has sparked protests in Papua, which has been seen a low-level independence conflict since a disputed 1969 UN-supervised vote brought Papua under Indonesian control.

Critics fear it could wrestle more power away from an area that is home to some of the world’s biggest deposits of gold and copper.

In an interview with Reuters in April, Papuan People’s Assembly (MRP) chief Timotius Murib said the legislation would lead to an influx of non-indigenous Papuans into new government posts and was brought in without sufficient consultation, a charge the government has denied.

Changes to Papua’s special autonomy law last year allowed the central government to create the new provinces, prompting the MRP to claim the change undermined autonomy and to file a judicial review at the constitutional court.

Indonesia’s Home Affairs Ministry said the government would abide by the court ruling.