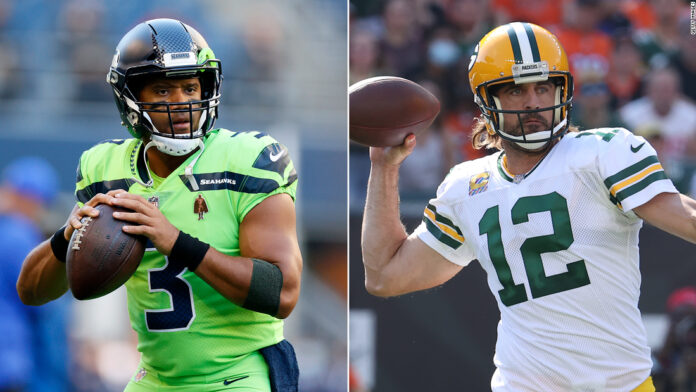 So when your star signal caller is absent, it is perhaps unsurprising your team might struggle.

That has been the case for both the Seattle Seahawks and the Green Bay Packers, who face off this Sunday at Lambeau Field.

For the Seahawks, their star quarterback Russell Wilson has been absent since October 7 after suffering “severe” injuries to the middle finger of his throwing hand.

However, after undergoing surgery the next day, Wilson was officially cleared to return to play on Monday after four weeks on the sideline, according to a statement from Wilson’s doctor, Dr. Steve Shin.

“(Wilson) had immediate surgery the following day in the form of a repair of a fracture-dislocation of his proximal interphalangeal joint and an extensor tendon rupture (mallet finger),” Dr. Shin said in a statement.

“Although this was uncharted territory (I have never in my career seen such a severe injury to the throwing hand of an NFL quarterback), I have also never encountered a player so committed to his postoperative therapy and with so much conviction to return to the same, if not better, level of performance as he had pre-injury.

“I am absolutely amazed at his progress, so much so that I can now confidently clear him for full return to play without reservation.”

Wilson suggested he was ready to return to the field with a video posted on Twitter with the caption: “It’s Time.”

In his absence, the Seahawks have found things tough with back-up quarterback Geno Smith at the helm.

They have lost two of the three games he missed and now sit tied for last in their division.

For the Packers, they were without the NFL’s reigning Most Valuable Player, Aaron Rodgers, for Sunday’s 13-7 loss against the Kansas City Chiefs because the 37-year-old was in violation of Covid-19 protocols.

Although Packers head coach Matt LaFleur had declined to comment on whether Rodgers had tested positive or had been vaccinated in a press conference, appearing on “The Pat McAfee Show” on Friday, Rodgers said he had contracted Covid-19 and that he is unvaccinated against the virus.

Having previously announced back in August that he was “immunized,” Rodgers went on to say on Friday that he was “in the crosshairs of the woke mob right now” over his vaccination status and that the media was on a “witch hunt” to find out which players were vaccinated.

Rodgers said he did not get vaccinated because he has an allergy to an ingredient in the Moderna and Pfizer vaccines and was scared about the possible side effects from the Johnson & Johnson vaccine.

The 37-year-old’s handling of the situation has led to criticism directed at the star quarterback.

Earlier this week, Rodgers reappeared on the show and took “full responsibility” for his earlier comments.

“I shared an opinion that is polarizing, I get it. I misled some people about my status,” he said. “And to anybody who felt misled by those comments, I take full responsibility for those comments.”

“I understand that this issue, in general, is very charging to a lot of people because we are talking about public health. I totally respect that,” Rodgers said Tuesday. “I made a decision that was in the best interest based on consulting with my doctors. And I understand that not everybody is going to understand that necessarily. But I respect everybody’s opinion.”

He added, “In the end, I have to stay true to who I am and what I’m about. And I stand behind the things that I said.”

Also this week, the NFL fined the Green Bay Packers, Rodgers and teammate Allen Lazard after a review found the team and its two players violated Covid-19 protocols.

And Rodgers is expected to suit up to face the Seahawks on Sunday after the Packers activated him off the NFL’s reserve/Covid-19 list on Saturday.

The Packers are 7-2 on the season and will be hoping for a bounce back performance if Rodgers returns.