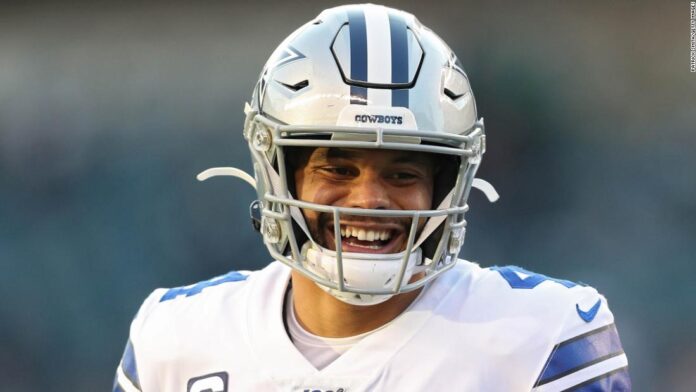 After almost two years of on-off negotiations, Dak Prescott has agreed terms on a mega deal that will extend his time with the Dallas Cowboys, a team that Forbes valued as worth $5.7 billion in September.
The Cowboys confirmed the contract on Monday and although the official terms of the deal have not been disclosed, multiple outlets have reported that it’s a four-year deal worth at least $160 million that includes over $120 million guaranteed.
According to the reports, Prescott’s deal averages to $42 million a year over the first three seasons with $75 million in the first season and a $66 million signing bonus.
Prescott’s brother Tad took to Twitter to congratulate his sibling. “When your little brother gets the call. Let’s go Dak time to win the Dallas Cowboys a Super Bowl,” he said. The Cowboys last won the Super Bowl in 1995.

Prescott, who was drafted by the Cowboys in 2016 in the fourth round, became eligible for a new contract in 2019 but played on a one-year contract last year while his representatives and the Cowboys couldn’t agree on a long-term deal.

He set career highs in 2019 — his 4,902 passing yards one yard short of Tony Romo’s single-season franchise record — and he reached 30 touchdown passes for the first time ever.

While playing on this one-year, $31.4 million franchise tag in 2020, the quarterback suffered a compound ankle fracture and dislocation which ended his season after five games.

Subsequently the Cowboys’ 2020 season nosedived, finishing 6-10 for the season with a rotating carousel of quarterbacks attempting to fill Prescott’s sizeable shoes.

However, with question marks beginning to surface about whether the 27-year-old Prescott might be on his way out of Dallas, the Cowboys tied him down to another four-years with the team.

Long-time Cowboys wide receiver Dez Bryant compared Prescott’s situation to another from his time with the team.

“The Dak situation started to remind me whenever we let Demarco [Murray] walk in [20]15 … me personally I knew our chances of having a chance to win the super bowl was gone.. it wasn’t the catch it was Demarco leaving the team which made me feel hopeless Smart decision,” he said on Twitter.
Visit CNN.com/sport for more news, features, and videos
Regular Pro-Bowl cornerback Jalen Ramsey said Prescott “earned” the pay rise, while former NFL wide receiver Chad Johnson joked:

“Congrats & McDonald’s on you don’t ignore my dm, diet is important‼️”